Scrooge in Paradise: Why Private Wealth is a Political Issue 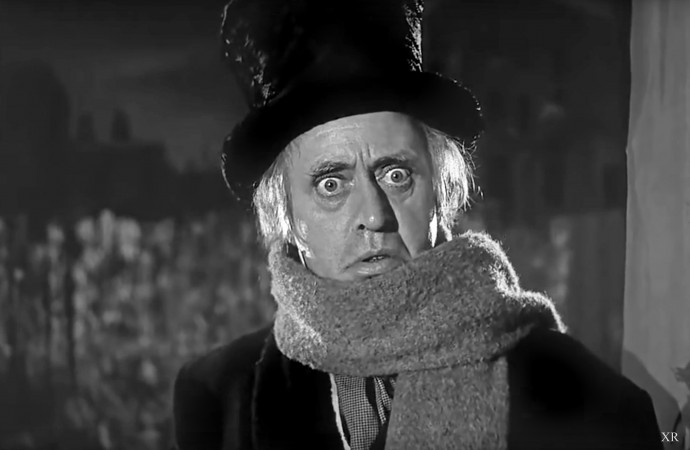 Time for the rich to redeem themselves? Alistair Sim as Ebenezer Scrooge in A Christmas Carol (1951).James Vaughan

As global inequality grows to “extreme levels” — as revealed in the just-released World Inequality Report — it is hard not to wonder what it bodes for the health of liberal democracy — around the world and here in Canada.

Even though our growing levels of inequality may not come close to those in the United States, recent conflict-of-interest stories about both Liberal and Conservative MPs, a growing reliance on tax havens, and cash for access scandals all raise serious concerns about the influence of the wealthy in Canadian politics.

If money talks, then the rich are now deafening the democratic system. As economist Branko Milanovic explains, “the higher the inequality, the more likely we are to move away from democracy toward plutocracy.”

One of my favourite recent New Yorker cartoons shows two men in business suits looking out from a lavish corner office, as one says to the other, “Part of me is going to miss liberal democracy.”

Although we’re not quite there yet, the dark tone of the cartoon reminds us that the economic “haves” can be just as likely to become disaffected with democratic politics as the “have-nots” often singled out as the source of populist pressures (in fact, elites have historically been the most important factor behind de-democratization, as Charles Tilly notes in a recent book).

Reading that New Yorker cartoon, it is hard not to imagine that at least one of those businessmen is likely to be a good friend of President Trump’s. He’s turning conflict of interest into performance art, talking up his daughter’s clothing line and getting national park gift shops to sell Trump branded wine.

Yet, while Trump and entourage demonstrate a particularly brazen willingness to blur the line between public office and private gain, the problem is a much wider one — with echoes here in Canada.

The Paradise papers revelations, the cash for access scandals, and the use of “loopholes” in ethics screens are all legal strategies for giving the wealthy an unfair advantage in a system where we are all supposed to be equal as citizens. Each of these strategies works in a different way to undermine the democratic culture that makes our political system work. In the process, they further blur the line between public good and private gain, eroding the trust that makes democratic politics viable.

Cash for access is the most straightforward. It takes the existing informal advantage that the wealthy have to ensure that their voice is heard politically and weaponizes it. Why bother voting as an ordinary Canadian when politicians will spend their time listening to someone paying $10,000 for a rubber chicken dinner?

The “loopholes” in ethics screens that various Liberal cabinet ministers have admitted to using, as well as the failure of certain Conservative MPs to disclose business ties to China, work more subtly. They create the possibility that public office holders will be swayed by their private assets as they make decisions designed to serve the public good. Why bother being an engaged citizen when you don’t know whether those making the decisions are pursuing their own interests or ours?

The Paradise papers tell us that many of the public figures who speak and act in the name of the public good use tax havens to avoid paying their fair share. Why bother buying into a democratic system requiring that we all do our part by paying taxes when those with the most power are actively avoiding doing so?

Of course, the line that we draw between public and private in a liberal democracy is always something of a fiction. Liberal political thought tells us that everyone is an equal citizen in the public domain, with an equal right to participate politically. Liberalism is also based on the premise that we should be free to pursue wealth accumulation in our private lives, meaning that we will often be quite unequal in economic terms.

In theory, this private inequality should not affect our formal public equality as voting citizens. In practice, things are rather different, as wealth often translates into a greater political voice — as any government that has tried to put a halfway house into an affluent neighbourhood or to reduce tax advantages for doctors incorporated as small businesses will tell you.

To keep a democracy alive, and to ensure that everyone has a meaningful voice and stake in the political system, we must do two things. We must work to keep those private inequalities from getting too large (via public education, social programs, a progressive tax system, etc.). And we must work to minimize the ways in which private inequalities translate into unequal influence (via election financing laws, conflict of interest provisions, etc.).

In Canada, we have made progress on some of these measures, but we have also fallen behind in many respects. As recent census data shows, earnings inequality has continued to grow in Canada over the last decade, while the top 1% increased their share of total income in 2015.

When trying to figure out how we got here, there is blame enough to go around. The Chrétien Liberals began the trend towards growing inequality when they gutted transfer payments for social programs in the 1990s. Inequality grew under the Harper Conservatives, who also eroded some of the other bulwarks against buying political influence, notably through reversing changes to election financing laws, making parties more reliant on private donors once again.

Although the Trudeau Liberals have clearly stated their desire to reduce inequality, and have begun to tackle some of these problems, their own recent conflict of interest scandals suggest a very long way to go before the political culture in Ottawa starts to change.

As that New Yorker cartoon reminds us, unless we start taking the problem of inequality much more seriously now, we may soon find ourselves thinking nostalgically of the “good old days” of liberal democracy.