Germany: Yet Another Migration Debate? 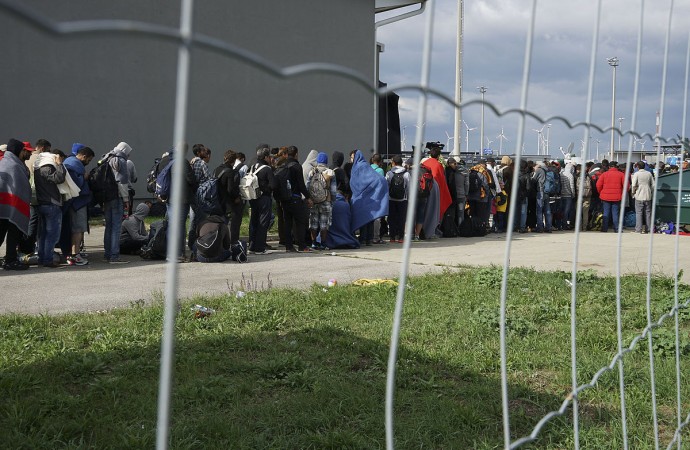 A line of Syrian refugees crossing the border of Hungary and Austria on their way to Germany, 6 September 2015.Mstyslav Chernov

Once again, pundits predict the downfall of German Chancellor Angela Merkel, leader of the Christian Democratic Union (CDU). Why? Her migration policies appear to fuel the rise of the nationalist Alternative for Germany party (AfD). Many observers offered similar proclamations at the peak of the Syrian crisis in 2015. Yet back then, Merkel effectively reiterated her principled stand on asylum and went on to survive the September 2017 federal elections, albeit with a weakened party position. Current polls also indicate that she remains popular, even more so whenever US President Trump attacks her or Europe.

However, personal popularity cannot hide the escalating backlash to the most recent parliamentary fissures in her three-month-old tripartite CDU–CSU–SPD coalition government. In mid-June, Merkel’s longstanding rival, Horst Seehofer, leader of the conservative Bavarian “sister party” Christian Social Union (CSU), brought the government to the verge of collapse by threatening to resign. As Interior Minister, he insisted on changes to refugee policy and announced a plan to create “transit centres” for processing asylum applications. Meanwhile, Merkel’s other coalition partner, the Social Democratic Party (SPD), strongly condemned Seehofer and anything resembling detention camps.

Reiterating the need for a European solution, Merkel briefly averted a coalition crisis by working out a compromise at the June EU summit. Yet regional tension over migration continued when right-wing leaders in Italy and Austria — the main sources of migrants crossing into Germany through Bavaria — pushed for tougher measures. In the end, European leaders agreed (among other things) to establish processing centres for migrants outside of the EU and to fully implement the 2015 EU–Turkey deal.

Facing right-wing critics, with Bavarian elections on the horizon in October, CSU leaders continue to push for stricter federal and EU restrictions, even though the number of arrivals has plummeted. Since the original CDU–CSU coalition deal — an annual cap of 200,000 refugees — became a moot point, Seehofer needed another demand. Despite Merkel’s modest success at the summit, coalition demands at home led to yet another compromise on new measures for “the reorganization of asylum policy.” Yet Seehofer’s intransigence appears to bolster Merkel’s support within the CDU, thus weakening any incentive for further compromise. Instead, her tenuous centrist coalition with the SPD holds, while the EU continues to struggle with a feasible plan for burden-sharing.

Do these rising tensions and fragile compromises finally herald Merkel’s political demise? Though her parliamentary problems persist, pundits typically misread these debates and their implications for refugee policy. By paying narrow attention to electoral dynamics, they overlook other reasons for her resilience. Instead, we see Merkel’s commitment to refugee protections, despite the electoral risks, as the interplay between securitization and de-securitization processes. Refugee rights remain more firmly entrenched in Germany than the rise of the AfD or Merkel’s tactical shifts suggest. The rhetoric of refugees as threats actually deflects attention from deeper legal and political commitments to refugee rights.

Within its corporatist political system, Merkel personifies the predominant socioeconomic coalition, which so far has successfully blocked rhetorical attempts to construct refugees as a threat. Key economic interests alongside rights advocates, each with close links to political parties, comprise this pro-immigration coalition. Albeit unlikely to garner news coverage, Merkel regularly reiterates that Germany needs many more workers for its long-term economic survival. As a component of that agenda, the government has continued to experiment with integration policies for newly arrived refugees.

These efforts reflect a liberalizing trajectory that began two decades ago — in the aftermath of German reunification and the Balkan wars — as a refutation of ethno-nationalist traditions. Originally forged on those traditions, the CDU–CSU alliance has struggled with a growing rift even before the current populist surge.

Thus far, humanitarian and economic discourses have prevailed over fears raised by far-right populists about cultural threats to national identity. Ongoing debates in Germany and across Europe suggest, however, that escalating securitization is unlikely to ebb since the complex phenomenon of cross-Mediterranean migration will continue. German asylum debates underscore the value of paying greater attention to debates beyond the narrow confines of public opinion or parliamentary squabbles. Regardless of how much longer Merkel remains in office, the future of European commitments to refugee rights is on the line.