Selling War and Peace: Syria and the Anglosphere 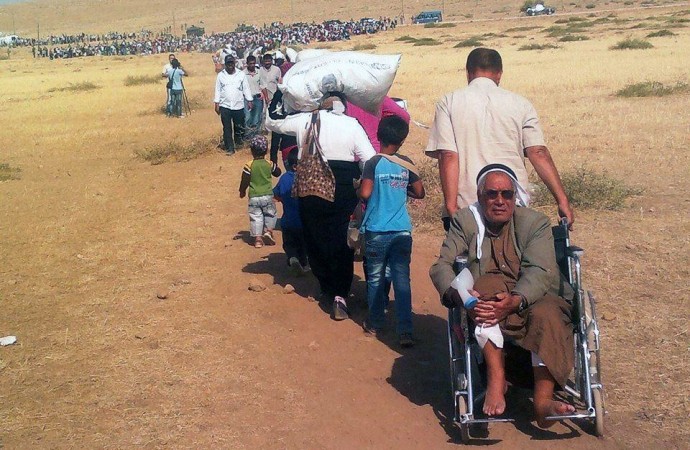 I have been researching and writing about the Anglosphere for fifteen years. I just didn’t realize it for the first eight…

My first book, Selling the War on Terror: Foreign Policy Discourses After  9/11, grew out of my Ph.D.  and analyzed  the language used to frame the policies that led to wars in Afghanistan and Iraq. This book showed how George Bush, Tony Blair and John Howard carefully crafted resonant and coercive language to appeal to their distinct national populations and acquiesce doubters. For example, Blair would emphasize  global leadership, Bush would speak a lot about freedom, and Howard would emphasize  the Anglosphere’s shared values. These differences were crucial to the selling of the War on Terror. However, I have subsequently become fascinated by what ties these states together, as much as what divides them.

My new book, therefore, both builds on and departs from this work. First, in contrast to the first book, my aim here was not to highlight the differences between the three states (the US, UK and Australia). Instead, the book emphasizes how these states act and behave as one. I theorize  the Anglosphere as a transnational political space, helping to conceptualize this crucial alliance that  sits at the heart of the liberal world order. In the book, I argue that the outcome of the conflict hinged upon the selling of war and peace within the old Anglosphere coalition.

Syria’s fate, in part, depended upon the Anglosphere’s discursive battle – the contest of ideas that underpins Anglosphere warfare and its avoidance. Second, the Syrian Civil War has challenged the non-interventionist impulses engendered by Iraq. I became an academic because I was so opposed to the Iraq War. Events in Syria have forced me to think about the limits of my broadly non-interventionist position. Working out that balance of foreign policy – the fundamental question of when and how to intervene, and when to stay out of a conflict – is crucial. I talk a lot about this balance between a broadly liberal desire to effect positive change, which is locked in battle with a broad  realist temerity. In short, it is crucial to consider the normative costs of inaction (non-intervention) as well as action (intervention).

Of most relevance for this CIPS conference, the book makes a robust  case for the importance of the Anglosphere, both today and through modern history. I argue that the ‘old Anglosphere coalition’ can be thought of as three of the world’s most important and reliably interventionist states: the US, UK and Australia. (I exclude Canada and New Zealand because of their two-step colonial experience, facing the UK and a powerful neighbour, which has dampened their interventionism relative to the three more-extrovert states). Through modern history, in combination, this ‘old Anglosphere coalition’ continues to act as a guarantor of global security, even in the tumultuous political moment characterized by populism, pandemics and rising powers.

The political debates that take place across the Anglosphere – as an English-speaking bloc  brought closer together than ever by technology and modern communication – frequently guide and shape the response of the wider international community to the world’s major crises. At present, rightly or wrongly, no other informal grouping of states comes close to the influence and importance of this English-speaking coalition in determining the landscape of international security. Syria has been no exception. The Anglosphere could have changed the course of that war and, indeed, it has, both through its direct military interventions and the avoidance of direct military intervention. And  yet, Syria has been a disaster.

In terms of policy lessons for the Anglosphere going forward, foreign policy should be holistic and joined-up. First, then, foreign policy must have a holistic focus. That means the Anglosphere cannot afford to focus on select parts of complex civil wars, which give the illusion of fixing the problem  while  ignoring the broader picture. In Syria, that happened as the Anglosphere became fixated on, first, chemical weapons and, second, ISIL. While both are abhorrent, they are not what killed most Syrians. Far from it. Second, policy must be joined up. From very early in the conflict, the Anglosphere set the terms through which it would understand and construct the war.

In short, the Anglosphere insisted that Assad must go. Still, that  intervention to achieve that was off the cards (because of the legacy of Iraq, the desire to let Syrians tell their own story, and a teleological belief that regime change would happen regardless). Insisting on regime change (and locking Assad out of peace talks) while failing to implement the policy necessary to make that happen  helped to perpetuate the conflict, rather than end it. This amounted to a (lethal) ends-means gap in Anglosphere foreign policy. A holistic, joined-up approach would be better, for the Anglosphere, for Syria, and future foreign policy.

🇨🇦🇳🇿🇺🇸🇦🇺🇬🇧
Read another great blog in this series: Our Way or Huawei: Fissures in the Five Eyes Alliance in the Face of a Rising China by Helen Baxendale
👁️👁️👁️👁️👁️

Are you a graduate student working on international relations, conflict and security studies or political violence? Submit a single paper or panel!