What will Russia do as Arctic Council Chair? 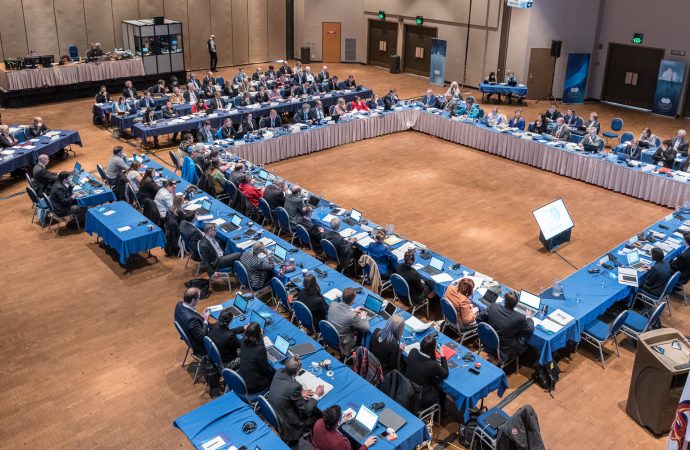 On May 20, 2021, Iceland convened the 12th Ministerial Meeting of the Arctic Council (AC) in Reykjavik. Upon concluding its 2-year term at the helm of the AC, the host handed over the AC’s gavel to Russia.

Russia’s assumption of the chairmanship of the AC generated a lot of anticipation amidst escalating tensions with western countries in other parts of the world. In the Arctic, strengthening of Russia’s Northern Fleet and its military capabilities in the North has been carefully followed by international observers, along with the country’s strategic investments and revamping of infrastructure in its Arctic territories, some of it of dual-use.

In many ways, today’s situation could not be more different than in the mid-2000s when Russia held its first AC chairmanship (2004-2006) before major developments in the region began to unfold, and the interest in the circumpolar North surged. The Arctic is no longer a region peripheral to international relations but instead situated much closer to their center, as reflected in the attendance of the AC ministerial meetings by the highest rank officials of Arctic states. Also, Russia today positions itself differently on a world stage after more than a decade of steady effort to reassert its global influence and advance its long-term goal of returning to superpower status. Both in economic and strategic terms, the Arctic zone of the Russian Federation plays a central role in realizing these ambitions.

In light of these developments, a question arises regarding Russia’s term as the chair of the primary intergovernmental forum aimed to promote collaboration, cooperation, and interaction among Arctic states. Whereas Russia’s internal developments and updates to its Arctic strategy have been analyzed and addressed in many other venues – most recently by Lackenbauer and Bouffard (2020) – it is also worth looking into the role of the AC Chair to manage more accurately expectations ahead of Russia’s two years at the helm of the Council, which entails not only chairing work of the Senior Arctic Officials (SAO) and the AC´s Sustainable Development Working Group (SDWG), but also the AC’s Expert Group on Black Carbon and Methane (EGBCM). It comes in tandem with chairing the Arctic Economic Council (AEC) and the Arctic Coast Guard Forum (ACGF) – two bodies that operate independently from the AC but maintain close bonds to it.

In practice, the AC Chairmanship tasks comprise the ABCs of arctic governance: Agenda-management, Brokerage, and Communication and representation. Agenda management includes both the agenda-setting (introduction of new issues on the agenda) and structuring (emphasizing or de-emphasizing issues already on the agenda) and summarizing the results of the SAO´s meetings. Brokerage refers to finding underlying areas of agreement and facilitating consensus among Arctic states, and communication relates to representing the institution toward the third parties and handling relations with Observers to the Council.

Typically, the greatest attention with regard to AC Chairmanship has been paid to the customary practice of suggesting by each Arctic country its priorities for the 2-year rotating term – the closest a country gets to play some form of a leadership role in defining the AC objectives throughout its tenure. It is worth remembering, however, that at all levels decisions in the Council are taken by consensus of eight Arctic states, which puts in place important limitations on the chairing country´s ability to steer the AC agenda, including the chair´s proposed areas of focus. Moreover, a more careful look at priorities put forward by Arctic states shows that they do not differ much from one chairmanship to another.

If we examine the last four chairmanships, from Canada’s term that began in 2013, Arctic states typically formulate their priorities around four major issues: communities/peoples of the Arctic; climate change and environmental protection; sustainable development, or social and economic development; and, often, the Arctic Ocean and/or strengthening the Arctic Council. The 2021-2023 Russian Chairmanship is in this respect no different from its predecessors. The chairing country highlights its particular Arctic interests through adding individual projects and events to the AC’s portfolio. Still, it does not have the capacity to unilaterally dictate the AC’s focus as the bulk of work of the Council’s working groups proceeds according to long-term work plans and spans beyond individual chairmanships.

Arguably, those are two other functions – brokerage and communication – that, over time, have become more important, even though they remain less visible from the outside. Concerning communication, as much as a representation of the AC towards other international bodies and organizations needs to be approved by all Arctic states on a case-by-case basis, it is a primary responsibility of the AC chair to maintain a dialogue and constructively engage with the Observers to the Council. It is now up to Russia to take care of it.

Even more importantly, the AC chair’s role has become essential in sustaining peaceful collaboration in the Arctic in the increasingly politicized and volatile international environment. Once more, when we look at the last four chairmanships of the Council, we see that each chair had to respond to major international – or domestic – changes and developments. During Canada’s time as chair (2013-2015), it was the annexation of Crimea by Russia in 2004. During the United States term (2015-2017), it was a complete domestic makeover with a change of administration from Obama to Trump, which in turn created a very challenging environment for Finland (2017-2019) that was forced to respond to the US reversed course on climate policies and security threats in the North. Finally, it was up to Iceland to steer the AC through the global COVID-19 pandemic, which prevented most of the Council’s in-person meetings during the last two years.

However, Iceland’s example shows that it is not only an ability to respond to major crises that is a required skill of the chair. Arguably, equally important is the chair’s capability to seize potential “window of opportunities” to advance and leap forward the Council and its work. This is precisely what Iceland accomplished when it swiftly relaunched negotiations of the AC’s first Strategic Plan upon change of the United States’ administration in January 2021, using an opportunity to effectively involve a more collaborative and climate-oriented Biden’s White House.

As Russia begins its second Chairmanship of the Arctic Council, there is a lot of discussion about what it will accomplish and what to expect during the next two years. Some of its interests collide with those of the western countries. While completing the projects and presenting the deliverables is one measure of the chair’s success, ultimately country’s performance at the helm of the AC depends on its ability to ensure smooth functioning of the Council, which includes both avoiding crises, overcoming impediments, and advancing AC’s development, whenever the opportunity arises. As the case of Finland shown, there are occasionally circumstances where even the most skilled team might not be able to find consensus among all Arctic states when their views diverge too far. Notwithstanding, in the next two years, it will be largely up to Russia to skillfully navigate those waters and ensure that the circumpolar collaboration can continue despite adverse developments in other parts of the world.

"If the stars align in proper fashion, the year 2023 promises to be key for decisions about Global Affairs Canada and the Canadian foreign service." Explains Daniel Livermore in a recent blog for CIPS (first published by the McLeod Group). Read here: https://www.cips-cepi.ca/2022/08/10/reform-of-global-affairs-canada-version-2023/

With great sadness, I am restarting my CIPS blog series with a tribute to Japan's late prime minister Abe Shinzō. He will be missed. https://twitter.com/uOttawaCIPS/status/1546593643112398854