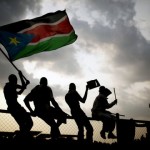 Presented by the CIPS and the Fragile State Research Network

Free. In English. Registration is not required. Seating is limited and available on a first come, first served basis.

South Sudan is the world’s newest state, and continues to be embroiled in a horrific civil war in which tens of thousands of people have lost their lives, many of them civilians; others have been forced to leave. The latest numbers show that as of July 2016, some 2.3 million people have been displaced by the conflict. Moreover, a staggering 5.1 million people—almost half the country’s population—require food assistance. The Office of the United Nations High Commissioner for Human Rights (UNOCHA) has called South Sudan “one of the most horrendous human rights situations in the world.”

In August 2015, a Compromise Peace Accord was signed, enabling parties to end the war and establish a government of national unity. However, renewed fighting occurred from 8-11 July 2016 in Juba, also against civilians as well as UN personnel, premises, and property, and rekindled the political, security, economic, and humanitarian crisis in South Sudan. In response, the UN Security Council authorized the African Union (AU) to deploy additional peacekeepers to South Sudan.

In light of this recent fighting in Juba, the panel will discuss: