Humanitarian Action on the Front Lines 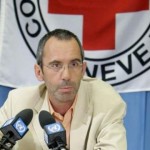 Armed conflicts in the Middle East, Africa, and Ukraine are devastating their respective civilian populations. The International Committee of the Red Cross (ICRC) strives to mitigate the effects of war and violence on vulnerable populations, backed by the Geneva Conventions, its own workforce of 15,000, and national societies of the Red Cross and Red Crescent worldwide. But how can the Red Cross operate in cases where basic norms of international humanitarian law are disregarded? ICRC’s Geneva-based Global Director of Operations will address the central challenges to neutral, independent, impartial humanitarian action based on his unique perspective overseeing the institution’s activities in all the world’s major armed conflicts.

Since July 2014, Dominik Stillhart has served as Director of Operations for the International Committee of the Red Cross in Geneva — the senior-most operational position in the organization. In that capacity, he has traveled to Syria, Iraq, Ukraine, South Sudan, Central African Republic, and Somalia to observe and assess the ICRC response to humanitarian challenges in these contexts. He has worked with the ICRC for 26 years, beginning in 1990. Throughout his career, he has gained field experience in Angola, Somalia, Rwanda, Sudan, Bosnia, Montenegro, and Israel and the occupied territories.