The Revolution in Syria 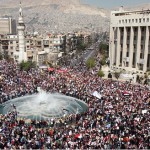 Presented by CIPS and the Human Rights Research and Education Centre.
Free. In English. Registration is not required.

Catherine al-Talli is a Syrian lawyer and human rights activist with the Syrian Human Rights Organization (SAWASIAH). She has been active from the start of the Syrian uprising documenting human rights abuses and distributing this information to the world. She was forced into exile in early September 2011 after Syrian security uncovered her involvement in support of the Syrian Revolution. After leaving Syria, she joined the Syrian National Council but later resigned to continue her work as an independent. Since leaving Syria, Catherine al-Tali has continued to support the Syrian uprising. She is currently based in Boston.