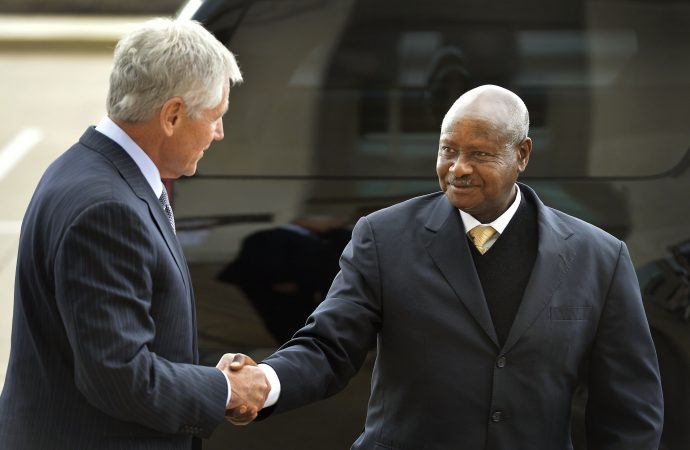 As the results from the Ugandan elections were announced, there was an overwhelming sense of dejà-vu. President Yoweri Museveni, in power for nearly 35 years, won with 58.6 percent of the vote.  His main rival, the musician and Member of Parliament Bobi Wine, received 34.8 percent.  In a familiar pattern, the opposition contests the results, while the President claims it was the most free and fair election since independence.

Make no mistake: This was an election, but not democracy.  Voters went to the poll, queued in orderly fashion, and marked their ballots on a day that was largely free of violence.  But elections in Uganda have long been a foregone conclusion. President Museveni, one of Africa’s longest serving presidents, has perfected a system that allows him and the ruling National Resistance Movement (NRM) to reap just enough votes to claim that democracy is working and thus bestow a thin veneer of legitimacy on their continued rule.  The keys to the system’s success are a well-oiled patronage machine, a ruthless, politicized security apparatus and an international community willing to turn a blind eye to democratic decline and human rights abuses in return for stability and support in the fight against terrorism.  This time COVID-19 also rose to the President’s defence, as did the widespread retreat of democracy around the world.

Many leaders have used the pandemic as an excuse to tighten their grip on power, but few have been as blatant and as successful as Museveni. Curfews, partial lockdowns and physical distancing regulations were introduced in late March 2020 and remained in place throughout the electoral campaign, providing ample opportunity to curtail the opposition, harass their supporters and clamp down on civil society and the media.  Combined, this made the January 14th election the most violent and the least fair in a two-decade long history of violent and unfair elections.  In one incident alone, at least 54 people were killed by the security forces, and more than 1000 arrested.  Wine spent most of the election campaign wearing a bullet proof vest and a helmet, constantly trailed by an intimidating convoy of police vehicles, mobile prison vans and armoured personnel carriers. After the election, his home was surrounded by soldiers and he remained in de facto house arrest for 12 days when the High Court ruled the situation illegal.

This oppressive regime is bankrolled by international donors.  Museveni has succeeded in establishing Uganda as a key ally of the US and a pivotal state in the fight against terrorism.  The country has been a top troop contributor to the African Union’s peacekeeping mission in Somalia, and its soldiers have also been deployed to other trouble spots like South Sudan and the Central African Republic. In return, Uganda has been lavished with development and military assistance. As the main donor, the United States supports Uganda with nearly $ 1 billion a year, while another billion flows from other countries and institutions like the World Bank. This includes Canadian aid distributed through charities and international institutions, not directly to the government. The US has trained more troops from Uganda than from any other country in sub-Saharan Africa except Burundi.

It is this well-trained, well-equipped military that Mr. Museveni placed in charge of security in the capital city and the surrounding areas in advance of the election. Battle-hardened generals with extensive experience from operations against terrorist groups such as al-Shabaab and soldiers trained to combat violent extremism patrolled the streets of Kampala while helicopters hovered above.

It is not only military aid that has strengthened Museveni’s grip on power. Development assistance also ensures that patronage flows to loyal supporters and corruption is rampant. Recently a $300 million World Bank loan for COVID-19 relief appears to have been transferred to a supplementary classified expenditure budget used to fund the security forces.  Members of the First Family jostled to share parts of this loan, while an inflated tender of $17million to procure oxygen plants for a national referral hospital was awarded to a company owned by the wife of the First Son and her sister.

After the violence of this election, international support for Museveni’s regime can no longer be justified in the name of security and stability. There is an urgent need for donors to re-think their relationship with Uganda. This should not entail a return to the high-handed and arrogant democracy-promotion of the past. Democracy cannot come from the outside or be dictated by finger-wagging donors threatening to withhold aid.

But past mistakes do not invalidate the value of democracy, nor diminish the need for solidarity with democratic struggles. Five of Uganda’s opposition leaders have urged the UN Secretary General to encourage donors to suspend all but the most essential humanitarian aid to their country. Bobi Wine has argued that the West has helped ‘cripple Uganda’s democracy’ and that it must now stand by those struggling against tyranny.

These are difficult times for democracy and for democracy promotion. The recent attack on the U.S. Capitol deeply wounded America’s standing in the world. But the answer is not to retreat from democracy; it is to recommit to it. Uganda is a test case for the incoming Biden administration and for all Uganda’s donors. There are encouraging signs that international pressure is increasing, especially from the US.  Canada has joined others in calling for investigation of election irregularities and violence by the security forces. That is a good start, but ritual condemnation followed by a return to business-as-usual needs to end.

CIPS is very happy to co-host another edition of the graduate conference on March 15.

On Wednesday, March 3rd at 4pm, we will have the pleasure of having @JawadHQ13 as our keynote speaker on the topic of India-China Contestations. He will be joined by Victor Radujko and @NIPABANERJEE.

What will Argentina’s Green Wave and its historic legalisation of abortion mean for the rest of Latin America?