The United Nations at 70: Looking Ahead 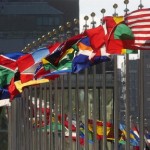 Presented by the CIPS.
Free. In English. Registration is not required. Seating is limited and available on a first come, first served basis.

On the occasion of the UN’s 70th anniversary, this panel of distinguished Canadians will consider ways of strengthening the world body, drawing on the lessons of its past successes and shortcomings. They will also discuss Canada’s possible contribution to this effort.

LOUISE FRÉCHETTE is Senior Fellow at the Graduate School of Public and International Affairs, University of Ottawa. In June, she was appointed Special Advisor on Peace Operations to the Secretary-General of the United Nations. From 1998 to 2006, she was the first Deputy Secretary-General of the UN. Before joining the UN, she pursued a career in the Public Service of Canada, serving notably as ambassador to Argentina, Uruguay and Paraguay (1985-1988), ambassador to the UN (1992-1994), Associate Deputy Minister of Finance (1995), and Deputy Minister of National Defence (1995-1998).

BOB RAE was elected eleven times to the House of Commons and the Ontario legislature between 1978 and 2013. He was Ontario’s 21st Premier from 1990 to 1995, and served as interim leader of the Liberal Party of Canada from 2011 to 2013. He is working now as a lawyer, negotiator, mediator, and arbitrator, with a particular focus on first nations, aboriginal, and governance issues. He also teaches at the University of Toronto School of Governance and Public Policy, and is a widely respected writer and commentator. An author of four books and many studies and reports, he is a Privy Councillor, a Companion of the Order of Canada, a member of the Order of Ontario, and has numerous awards and honorary degrees from institutions in Canada and around the world.

DAVID PETRASEK is Associate Professor in the Graduate School of Public and International Affairs at the University of Ottawa. He has worked extensively on human rights, humanitarian and conflict resolution issues, including for Amnesty International (1990-96), for the Office of the UN High Commissioner for Human Rights (1997-98), for the International Council on Human Rights Policy (1998-02), and as Director of Policy at the HD Centre (2003-07). He has taught international human rights and/or humanitarian law courses at the Osgoode Hall Law School, the Raoul Wallenberg Institute at Lund University, Sweden, and at Oxford University. David has also worked as a consultant or adviser to several NGOs and UN agencies.