On September 12, journalist and author Ahmed Rashid spoke at CIPS on Pakistan’s current challenges and its prospects for coming years. The present situation, he declared at the outset, is grim. Three separate insurgencies are causing mayhem; the economy is crumbling; and an acute energy crisis is having huge impacts on national growth and development. The legacy of multiple wars in and around Pakistan has brought about civil conflict among the nation’s Muslim sects, and religious minorities are being driven into exile. 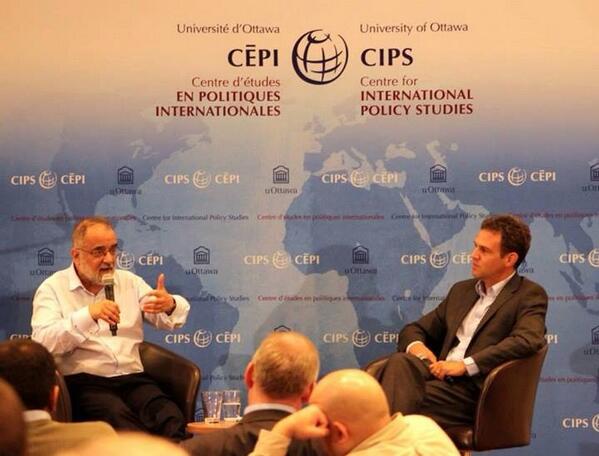 This growth in militancy, Rashid stated, has been fueled by the state itself. Pakistan’s government and military trained fighters to take part in foreign conflicts, bringing ruinous consequences as those militants now come home and fight internally. While much of the wider region’s troubled legacy of the past 30 years has been foisted on Pakistan, many of its troubles are self-generated.

The military now has an intellectual understanding of the dire internal situation in the country, and a real commitment to civilian-military dialogue.

It is time for Pakistan to look internally at what’s gone wrong, in Rashid’s view, instead of blaming all its troubles on foreign conspiracies. Three major opportunities to turn around the country’s fortunes have been missed: Pakistan failed to join East Asia’s path of growth and development following the end of the Cold War; it failed to take up the international community’s desire to help it transform amid the post-9/11 war on extremism; and it failed to use its influence over the Taliban to avert the terrible consequences of the 2009 U.S. ‘surge’ in Afghanistan.

With the recent transfer of power between civilian governments in Pakistan, the potential exists for new relations to be established between the government and military. It is vital, Rashid noted, that civilian priorities in the sphere of national security hold weight as opposed to only military ones. With the economic ‘pie’ shrinking, the military cannot maintain current spending levels. A coherent plan against insurgency and terrorism must be jointly supported by civilian and military powers; and an absolute ‘zero-tolerance’ approach to all forms of extremism must be implemented through a comprehensive strategy of nation-building.

On the economic front, Rashid stated, Pakistan needs a political party expressing middle-class interests. Given the desire of the country’s business class and civil society to give most-favoured-nation trading status to India, for example, the military’s proscription against such a move must be overcome.

Turning to Afghanistan, Rashid identified his main concern as the upcoming political transition. The West has few tools left to ensure that a fair election brings a legitimate post-Karzai government to power; and while Pakistan can urge the Taliban to allow elections to proceed, it’s unfortunate that the 2014 election will occur amid the US military withdrawal. Afghanistan needs its neighbours’ commitment not to meddle in its internal affairs—but there is no diplomatic channel for obtaining such a commitment. In particular, an India-Pakistan dialogue on Afghanistan is imperative; and it could happen through the facilitation of neutral countries.

The talk ended on a more optimistic note in response to an audience question about Pakistan’s prospects for overcoming blockages to progress. Rashid noted that the military now has an intellectual understanding of the dire internal situation in the country, and a real commitment to civilian-military dialogue. Calling it a “very positive development on both sides”, he said he was hopeful that dialogue has finally started to “dig the country out of the hole”.

The video of Ahmed Rashid’s CIPS talk can be viewed here.