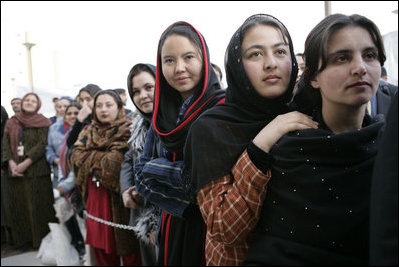 International Women’s Day should be marked by acknowledging that claims — made by the international community and the Afghan government — of advances in promoting women’s rights in Afghanistan are largely disconnected from reality. Human Rights Watch and the Afghan Women’s Network agree.

Gains were made in the initial years after the expulsion of the Taliban, the most commonly cited one being progress in girls’ education. The number of women in parliament, in the police and armed forces, and serving as ministers and judges, albeit symbolic, are also achievements. Mostly urban, elite women benefitted from these gains, which have not trickled down to women and girls in the lower economic echelons and in rural areas where the Taliban still reign.

The sustainability of these gains is especially in question. Women’s development has suffered setbacks due to the resurgence of the Taliban, which the Afghan government and the international community have failed to prevent. Any gains are now being eroded by poor security, weak rule of law, women’s economic dependence on men, and a strengthening conservative faction. Women’s rights to education, to health services, to work, to membership in parliament, and to dress as they see fit look rather shaky and ever more symbolic. Violence against women is widespread and women have little access to justice.

Attention to these harsh realities has been grossly deficient. Statistics on girls’ enrollment in schools does not take into account the dropout rates, the number of school-going girls burnt with acid or poisoned, and the number of girls’ schools closed. More than seventy-five percent of Afghan women are still illiterate.

Widespread repression of women amounts to de facto slavery: eighty percent face forced marriages, with some women bartered in settlements of debts or disputes. Fifty percent of girls under 12 and sixty percent of those under 16 are married.

The health implications of child marriage are obvious. Young girls with underdeveloped wombs struggle during pregnancy and often die in labour, along with their babies. Risk of death in childbirth for girls under 14 is five times higher than for adult women. Afghanistan has one of the highest maternal mortality rates in the world.

Abuse of women also continues unabated. Alarming data has been collected by Human Rights Watch on “honour” killings, rape, and gang rape. Impunity and weak law enforcement continue to undermine women’s rights and the judicial system itself. Women are essentially unable to access the justice system so perpetrators of violence are rarely prosecuted.

Prompted by the international community, gender has been mainstreamed, meaning that gender equality is to be a crosscutting theme for planning all projects in all sectors. But the standardized project checklist, used routinely for integrating gender, does not realistically serve women’s interests.

Critics of Western-aided programs say that the international community rushed in to promote women’s development by introducing programs rooted in Western worldviews without taking into account the social and cultural realities of an Islamic society only recently freed from Taliban bondage. Foreign values embedded in planning for women’s development could not be absorbed and, consequently, could not bring about sustainable changes.

Under the sociopolitical and cultural norms pervading Afghanistan — still a highly conservative, Sharia-based society — successful intervention to advance the position of women requires a strategic, low-profile approach. Massive investments in programs to benefit women must be made without alarming the conservative and religious forces and inflaming the societal anger on which the Taliban capitalizes. Women’s-rights-awareness-raising programs, financed by Western donors, are more likely to raise alarms. Such programs are not of much practical use in any case when women, made aware of their rights, can hardly exercise them or lobby for them in the absence of support from family, society, or the justice system.

Arguably, women’s empowerment might be achievable in an imperceptible fashion through massive investments (of the size of the Marshall Plan) in a national program for women, with four components: 1) community-based education, 2) health services, 3) income generation, and 4) justice. But only if community support will ensure the sustainability of the programs. Of equal importance is the participation of women in the government-driven reconciliation process with the Taliban, in order that women’s rights not be bartered for peace.

It would be strategic to introduce community-based girls’ schools in consultation with the village mullahs and elders — a process with a proven track record of promoting community support. Afghan rights activists also believe that education itself will engender an inner consciousness and awareness in women of their rightful position in the society. Discussion of women’s rights in a public forum, widely known to produce a backlash, could thus be avoided altogether.

In terms of healthcare, even conservative men welcome programs that bring midwifery, neo-natal, and post-natal services to their family doorstep. Such programs can serve as platforms for introducing more comprehensive health education, including reproductive health.

In terms of income generation, statistics show that around the world, income empowered women are less likely to be abused. Afghan women prefer home-based opportunities that add to the family income. This approach helps women to earn positions of dignity in the family and the community, effectively empowering them without raising eyebrows.

In terms of justice, there are many goals, the first being to make it easily accessible to women. Hard-core measures in reforming laws and penal codes and improving the performance of the judiciary are essential to reducing violence against women. As well, educating males, religious leaders, and village elders would be essential to facilitating attitudinal shifts in favour of justice for women.

Finally, the promise of women’s participation in shaping the political dialogue regarding a lasting and meaningful peace with the Taliban has been almost completely ignored. The international community’s continued aid presence in Afghanistan should be made contingent upon the government involving women in the consultation process leading to any agreement with the Taliban. After all, surely it is women who have the most to lose in this process.