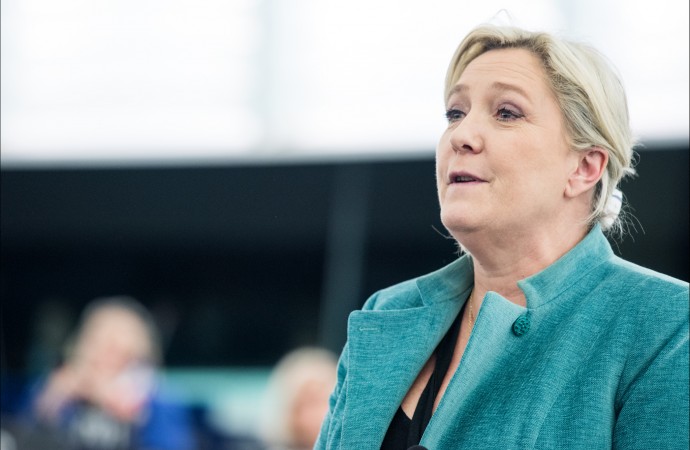 The day following President Donald Trump’s inauguration was marked by the Women’s March on Washington and hundreds of “sister marches” in cities around the world — a global display of disapproval for the new US leader and his retrograde understanding of human equality.

The western German city of Koblenz hosted one too, but with a distinct local flavour. Its target: a “counter-summit” of far-right European political parties who call themselves the Europe of Nations and Freedom (ENF).

The ENF can be described as fringe. In the 751-member European Parliament, for example, it is the smallest of official political groups, with 40 members from nine countries. Perhaps unsurprising then, the Koblenz “counter-summit” was also small — 800 delegates at most (at least two-thirds of them men). Compare this with 3,000 demonstrators who surrounded the event plus 1,000 police officers who were sent to secure it.

But however small, the group raises serious concerns around the perpetuation of the rightist views it promotes, with the likely support of Russian and U.S. leadership.

For many Europeans, the event smacks of the darkest chapters of Europe’s history, starting with Mussolini’s attempts in the early 1930s to set up a “Fascist International.” To make things even worse, the contemporary far-right has already shown that it is capable of going mainstream fast — witness the outsized role played by the UK Independence Party in the Brexit vote or by the so-called Alt-Right movement in the election of Trump to the US presidency.

Indeed, the latter was precisely the inspiration for the congress. Europe’s top far-right leaders gathered in Koblenz for no other reason than to latch themselves onto Trump’s populist bandwagon and fire a few broadsides against their political opponents.

A public relations stunt on this scale never lacks in slogans. For Geert Wilders, head of the Netherlands’ Party of Freedom it was this: “Yesterday a new America, today Koblenz and tomorrow a new Europe.” Marine Le Pen, the leader of France’s Front National, went with “2016 was a year when the Anglo-Saxon world awoke, and 2017 I’m sure is the year when the European continent will also awake,” thus at once referencing her support for Brexit and Trump as well as for French resistance against “Anglobalization.” For Frauke Petry, leader of the Alternative for Germany and the convention’s host, the key word was “fatherlands”: “We all want to revive the idea that existed for decades of a Europe of fatherlands, where we practice politics together but are not subject to the dictates of Brussels and Strasburg.”

Such sloganeering will continue as all three leaders face important electoral tests later this year. In March, Wilders will be hoping to see his party establish itself as the Dutch parliament’s largest party; in April and May, Le Pen will be aiming for the second round of France’s presidential election; and in September, Petry’s Alternative for Germany — the youngest of the ENF parties — will be looking to capture its first Bundestag seats.

Logically, far-right internationalism is an oxymoron. Oriented towards national elections and nationalist in nature, Europe’s far-right parties are unlikely to ever collaborate on a blueprint for a new Europe. Journalist Katie Engelhart, who went to Koblenz to attend the convention and interview delegates for Maclean’s, observed that far-right party leaderships openly admitted to being “united not in common cause, but against common enemies: the perceived menaces of Islam, political correctness, globalization, and the European Union.”

This time, however, far-right parties have some powerful allies on the outside. Trump, whose own slogans (“America First,” “open your heart to patriotism”) are indistinguishable from those of Europe’s far-right (“Austria First”; “Patriotic Spring”), has already shown interest in some of Europe’s upcoming elections. Earlier this month Le Pen was seen visiting Trump Tower in New York, though a meeting between the French candidate and Trump’s team was never confirmed.

The man sitting in the Kremlin’s towers, Vladimir Putin, is also interested. When the livestream of the Koblenz congress failed on Saturday — the organizers had banned German news networks from covering the proceedings — it was Russia Today’s German service that jumped in to help. This is not surprising. At least one European far-right party — Austria’s Freedom Party — has signed a deal with Putin’s United Russia party. At least one other, namely Le Pen’s National Front, has accepted loans from Russian banks. A few more, like Hungary’s Jobbik and Greece’s Golden Dawn, have sent delegates to “conservative” political conferences in Moscow and St. Petersburg. It may be that this motley alliance is yet to show its full potential. Covert methods that Russian agents used to influence the outcome of the US election — hacking, kompromat, and disinformation campaigns — have been used before in European elections, and could be used again, but with much greater effects.

Putin’s Russia could, in fact, advance its agenda just by being its illiberal and authoritarian self. When Matteo Salvini, head of Italy’s Northern League (now polling at 15 percent), went to Moscow in 2014, he loved it: “No clandestine immigrants, no squeegee merchants and no Roma encampments.” (Arguably, it was a subtle nod to a 2005 anti-immigrant campaign, “Clean Up Moscow’s Trash,” by Dmitry Rogozin who subsequently rose to become Russia’s deputy prime minister.)

Salvini hammered on the same theme on Saturday in Koblenz, arguing that immigrants are taking over Italy and that refugees are tomorrow’s terrorists. His “arguments” speak volumes about what a “Europe of fatherlands” would look like if the far-right carries the day or, no less alarmingly, if its agendas continue to be adopted by “normal” political parties: The end of human rights norms, of free movement, of the Euro-Atlantic alliance structures — in other words, the so-called liberal international order.

The article was originally published on 23 January 2017 on OpenCanada.org.

On April 19th, we hosted a panel with @JustGovGroup and @CICOttawa to discuss the topic of "Peace with Justice in Colombia?" Check the video to hear from @authorwadedavis, Paola Jiménez, Nelson Ovalle Diaz, Stephen Baranyi and Kimberly Inksater.