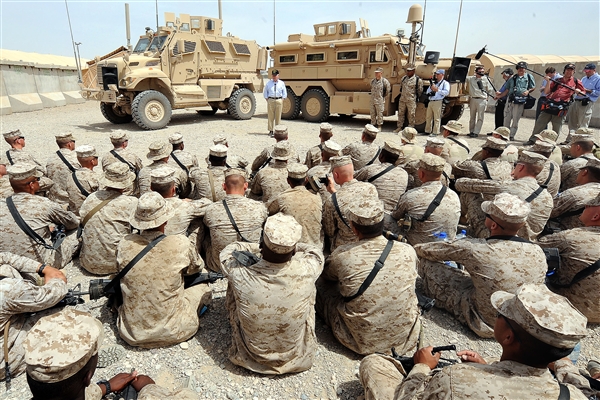 During a May 7, 2009, visit to Camp Leatherneck in Afghanistan, Defense Secretary Robert M. Gates promises Marines he will ensure they have the medical capabilities they will need if they’re wounded. U.S. Air Force photo by Master Sgt. Jerry Morrison

Canada has already invested 15 years, billions of dollars, and over 160 human lives to secure and stabilize the fragile state of Afghanistan. Equivalent efforts, however, have not been made to assess the effectiveness of Canada’s involvement; nor have the lessons learned in Afghanistan been appropriately recorded, not only for dissemination to the Canadian public but also to inform future programs.

In April, a session hosted by CIPS’s Fragile States Research Network (FSRN) with John Sopko, the Special Inspector General for Afghanistan Reconstruction (SIGAR), provided a much-needed forum for Canadian government officials, civil society practitioners, and researchers to share knowledge on the effectiveness of stabilization activities in Afghanistan. Based on 250 audits of American-financed programs over the last five years, SIGAR’s findings cover such key areas as security, health, government, and education. While Canadian-financed projects were not included in the audit, how the programs work on the ground is not much different. The lessons generated are essential for measuring how well the international community’s military and civilian aid is being used, especially since overseeing and monitoring such projects under uncertain security conditions is becoming increasingly difficult.

Despite investments of several billion dollars by the international community, conflict and violence are escalating, the country is experiencing a severe economic decline, and the Afghan National Unity Government (NUG) is facing unprecedented challenges. Any advances in health, education, and security have been brittle at best. Sopko concluded that not much has improved in the past five years since Afghanistan is unable to perform some basic state functions. A comprehensive security, stability, and economic failure is quite possible.

As its first major problem, Afghanistan is unable to bear the costs of maintaining the police, national army, and air force. The security situation is deteriorating rapidly with conflict escalating. Despite an unprecedented level of financial support invested in military aid, led by the United States, the Afghan government currently controls only 57% of its territory, a decline from 72% in 2016. Canada, which ended its combat role in 2014, also supports these costs and confirmed its future commitments at the Warsaw Conference in 2016.

Second, the government is unable to deliver basic services like health and education. The latest poverty report from the World Bank and the Afghan government shows that socio-economic progress at risk.

What is the root cause of such poor results? A dangerous combination of poor leadership and corruption currently pervades all sectors. According to Afghan news media, high ranking military and civilian officials involved in large-scale corruption have amassed great wealth from government funds, much of which comes from international aid.

The Afghan army is not as strong in numbers (320,000) or competence as is shown in official documents. Because incompetent generals run the army, it has little offensive maneuverability, playing a defensive role only in taking back strategic areas from the Taliban. Many of these generals were promoted not on merit but by buying their positions through bribes or nepotism, both ethnic and family. The number of Afghan troops is actually lower than that recorded on the payroll, meaning that  the salaries of “ghost soldiers,” drawn from military aid, are pocketed by commanders. Theft of the salaries of real soldiers is also a problem, resulting in a high level of attrition, which weakens the forces.

This corruption in turn strengthens the Taliban, which is known to buy American-supplied fuel, weapons, and ammunition from disaffected Afghan soldiers at lower than market prices. The Taliban also rakes in profits from the ever-escalating poppy cultivation, opium production, and narcotics traffic. Sopko reminded the audience that much of the opium in Canada comes from Afghanistan.

This leadership deficit and corruption are prevalent in other sectors and civilian ministries as well. Ghost syndrome dominates the education and health sectors, which Canadian dollars have been supporting. Recently Canadian Press raised concerns about the association of Canadian funds with ghost students, ghost teachers, and ghost schools. Similarly, concerns have been raised about ghost clinics and medical professionals, and the pilfering of medication, vaccines, and equipment.

Feedback from Sopko’s audience also pointed to factors other than bad leadership and corruption, such as the Resolute Support Mission failing to provide the needed training . Similarly, capacity building in civilian ministries was inadequate because of poor technical assistance offered by the international community. Part 2 of this blog looks beyond where the money went to what to do about it.