Beyond the Macron–Trudeau Bromance, Part 1: The French Elections 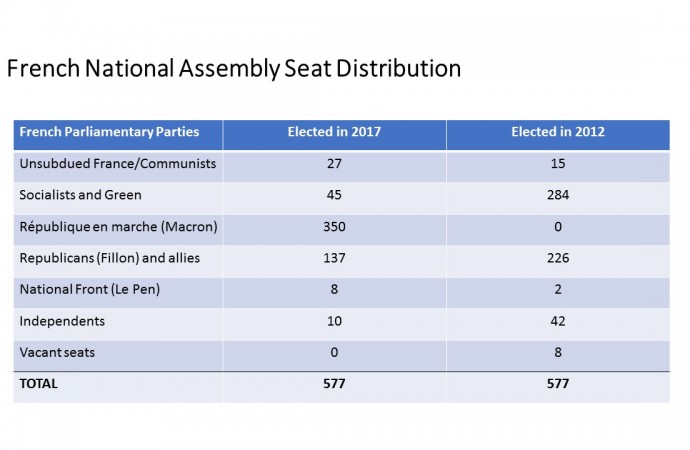 “Alea jacta est” — the dice have rolled… France’s National Assembly will look totally different from the previous one. While the final results have only confirmed the amazing revolution, several questions remain as to the future of French politics and how might it impact Canada–France relations.

The June 18 legislative elections have been marked by the highest level of abstentions ever for a second round, exceeding 55%; although significant, this can be interpreted in several ways. President Macron referred to a failure of mobilization on the part of the opposition. Maybe he is right and that the odour of defeat prevented voters from leaving their homes. Has fatalism become a French trait? Or could it just be a formidable hangover after the eradication of traditional parties during the first round of voting on Sunday June 11, confirming the results of the presidential elections? Charitably, one could argue that it also reflects the endless “demonization” for a full week by all parties but Macron’s La République en Marche of the “risk of a landslide,” which may have kept “soft” supporters of Macron at home.

Speaking of landslide, 350 is not good enough? It is huge if one considers that the existing system founded by de Gaulle in 1958 to avoid the domination of political decision-making by a plethora of competing parties — “La République des Partis” of the Fourth Republic — was destroyed in less than 17 months by a 39-year-old guy who, speaking of de Gaulle, is already displaying a regalian comportment.

It may seem farfetched, but one could draw a parallel with Canada even though our electoral system is very different. After all, the Liberal Party under Justin Trudeau was in third place at the beginning of the 2015 elections — invidious as it may seem for what had been — wrongly — branded the “natural party of government.” And Justin Trudeau was dismissed early on until the stunning “Reconquista.” Macron was also treated dismissively and he might not have become president had it not been for the Republican party crumbling under the weight of Fillon’s wife’s false job as his assistant (“Penelopegate”). One should remember that Macron on the first round received 24% of the votes to Marine Le Pen’s 21.4%. Of course, in Canada, the difference is that the opposition has not disappeared!

The French system ensured that only eight Front National candidates were elected and thus did not reach the 15-member threshold to be a recognized party in the National Assembly. While Le Pen did obtain impressive numbers in the second round of the presidential election, Macron’s victory put a huge dent in French populism/fascism… but the movement is not dead. Far from it.

The key issue now is what kind of majority for what kind of policies will emerge. The first test case might well be the revision of the “code du travail,” which Macron wants to bring the French economy to the 21st century. Indeed, the Macron/Philippe tandem will want to work at top speed to implement as much of the president’s program as possible before the opposition reclaims its existence… That will take some time as the “legitimate” right (i.e., not Marine Le Pen’s Front National) is already splitting into two groups “committed to co-operate.”

If ever a barely known French leader took the country by leap of faith, Macron epitomizes something that France has never done since Napoleon Bonaparte. The Third and Fourth Republics kept regurgitating leaders. Only Pierre Mendès-France could be considered an outsider — in policy terms — though he was well known as the only man to turn down de Gaulle at the end of the war, suggesting that he did not want to play in a trio already reading from three different scores. De Gaulle himself stormed into politics but again, people knew more than enough about him.

Prime Minister Trudeau, despite the name recognition thanks to his father, certainly did not come to power preceded by a unique record of accomplishments. At the time, people remembered his fight against Mr. Brazeau more than anything else; although admittedly it gave him an aura of bravery and determination, it did little to educate Canadians about his views other than naturally belonging to the younger generation of Liberals. Good looks and inheritance are fine, but definitely not sufficient to make a leader.

Ultimately, Macron and Trudeau may well be the most significant leaders — okay, Trump too, but for utterly different reasons — of the next five to ten years.