Russian Expulsions: “If there was ever a time for diplomacy, this is it” 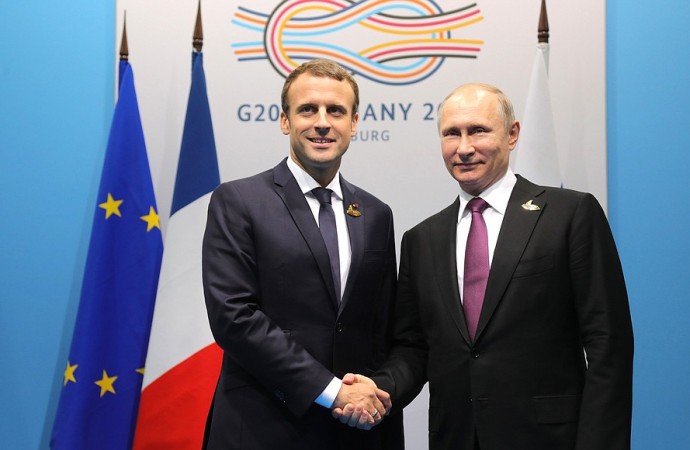 Emmanuel Macron relishes tackling intractable problems so perhaps is the person to talk to Putin.Kremlin

About 50 years ago, Swedish writers Maj Sjowall and Per Wahloo created addictive detective stories rooted in sociology. The reader knew who was murdered and often learned early on who did it. The mystery to be solved was why.

Today, even fiction writers can’t keep up with the unfolding chronicle of breaking surprises coming out of the real world of politics — the latest, strangest episode being the attempted murder in a peaceful English cathedral town of an ex-double agent from Russia and his visiting Russian daughter.

We know how it was done — with a military grade nerve agent. Its Soviet-era provenance has led to the Western conclusion that it is “highly likely Russia is responsible.”

US hawks view Vladimir Putin as a “KGB thug” and accuse him (without evidence) of cold-blooded murders of political and journalistic adversaries. They have no problem believing he ordered the murder of Sergei Skripal in Salisbury.

But why? Skripal was a convicted traitor pardoned (by current Russian Prime Minister Dmitry Medvedev) to permit a spy-swap largely to Russian advantage, repatriating from US custody 10 deep sleeper agents. Skripal’s life in the UK was quiet and nonthreatening.

Putin loves to rattle the West, but he is anything but reckless. With the World Cup coming to Russia this summer, such an aggressive act would have risked a lot.

Perhaps he has been carried away by a fever of self-confidence. He has been electorally rewarded for having restored Russian pride, after presiding over an oil-driven economic recovery from the chaotic 1990s when Russians threw off the old communist order without knowing how to build a new democratic one.

But he actually doesn’t get democracy at all. Though he pledged to safeguard it when he took office on New Year’s Day, 2000, he soon cut back Russia’s barely tasted democratic liberties. Most Russians were okay with that, willing to “settle down” in return for security and predictability. Others, notably professional and younger urban Russians, grew tired of being treated as political infants. Mass protests in 2012 in Moscow and St. Petersburg, against a clumsily doctored parliamentary election and Putin’s return to the presidency, scared the Russian leader, who abhors revolution.

He believes that the US orchestrated recent demonstrations calling for “Russia without Putin” and those that ousted Russian ally Viktor Yanukovych in Ukraine in 2014. Popular uprisings elsewhere purporting to be pro-democracy and anti-corruption were to him attempts by a too-confident US to engineer “regime change,” in Serbia, Iraq, Libya, and eventually in Syria.

He opted for payback by playing the disruption game himself, deploying Russian cyber-sophistication into pernicious and exploitable social media chains in Western societies he judged weakened by populist nationalism. He sought to disrupt and discredit Western politics if he could, but above all to undermine unity in the EU and NATO he saw trying to expand up to the Russian border. He isn’t about re-gaining Soviet territory (except for historically cherished Crimea, an orphan of the USSR’s break-up). He wanted to underline Russia’s return to significance.

Russians ate it up. Standing up to now-unpopular America is the easiest political tactic in Russia today, adding to Putin’s popularity. The idea that the West can despise Putin but retain affection for the Russian people is to miss that they are largely one and the same, at least for now.

So, Western countries expelled 150 Russian “diplomats” considered spies, partially to support the most embattled leader among them, Theresa May, but primarily to curtail Russian trouble-making in their own societies by rolling up Russia’s “spy” networks. They were fed up with covert and open support from Russia for divisive, illiberal nationalist movements opposing democratically elected governments.

Russia has since announced 150 counter-expulsions.

But questions remain, including why Russia would ignite a storm with dire, unintended consequences. Incompetence? Lack of controls? Dangerous over-confidence?

If ever a situation called for diplomacy, this is it. Effective “diplomacy” does not mean avoiding confronting facts in order to appease an adversary. It means deploying them in private to detoxify a crisis. Once it is communicated that Putin cannot continue as he has without real damage to Russia’s interests, there needs to be agreement for new rules and a roadmap for going forward, bearing in mind new technologies have new vulnerabilities to novel attacks.

And, with this in mind, who is “the diplomat” to do it? Donald Trump said he didn’t raise the chemical attack when he called Putin March 20 to “congratulate” him for his staged election because he wanted to preserve a constructive relationship between leaders at the top. He was assailed in the US press. (Trump’s approach to Putin is similar to Justin Trudeau’s avoidance of criticizing Trump, in that case because of NAFTA.) His overture to Putin in that phone call to meet him at a face-to-face summit, perhaps at the White House, shows he’s keen to be the key Western player. But he’s too conflicted with the Mueller inquiry and the US hysteria over Russia’s interference in the election. US allies by now have scant confidence in Trump’s willingness and ability to stick to an agreed line.

Someone else has to be the one. Not Merkel, who dislikes Putin. The Canadian G7 chair has set its priorities as being entirely behind Ukraine at the expense of relations with Russia.

Emmanuel Macron relishes tackling intractable problems; he is probably the candidate with the most stature at this time.

At any rate, though the Salisbury aggression may remain unsolved, it must never be repeated. “Don’t even think about it” has to be a convincing message. The expulsions showed some necessary teeth. We need now an effort to reach some hard and fast understandings if we are to halt today’s ominous and dangerous downward spiral into the unknown.

Jeremy Kinsman was Canadian ambassador to Russia from 1992 to 1996. He teaches at the University of California and Ryerson University and is co-author of A Diplomat’s Handbook for Democracy Development Support. He participated in a CIPS panel discussion, Is Democracy Rising or Receding? (video here), and wrote a blog for CIPS on Diplomatic Prospects for Supporting Democracy Development.

This article was first published by OpenCanada.org on 3 April 2018.