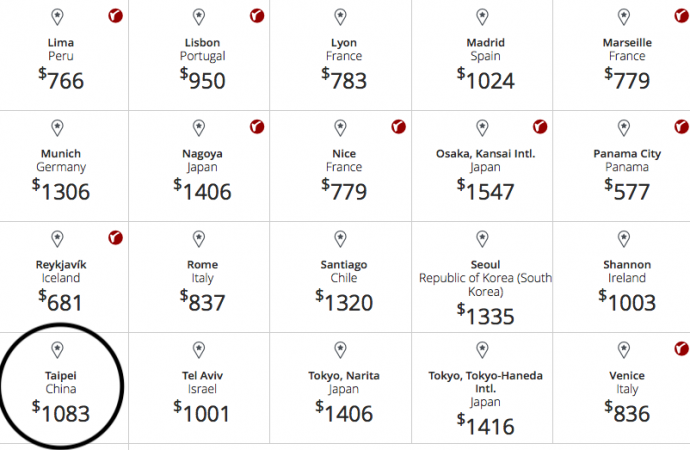 Sure enough, the Air Canada website was listing Taipei as being in "China," as this screen shot from May 15 shows.

China’s increased censorship of foreign websites came to light on May 15, when it was reported that Air Canada had changed the drop-down menus of its destinations to show Taiwan’s capital Taipei as part of China. Air Canada’s capitulation to China’s demand immediately drew protests from Taiwan’s Foreign Ministry, threats of boycott from Taiwanese-Canadian communities, and a slew of op-eds.

The astonishing thing about this is that the designation of Taipei as part of China is counter-factual. We may as well state it boldly: Taiwan has never been part of the People’s Republic of China. China is obviously using private corporations in Western countries to prepare the ideological groundwork for eventual annexation, with or without the consent of the 23 million people of Taiwan. Intentionally or not, Air Canada has made a political statement by not challenging China’s claims to a third country. Air Canada’s response is that it is necessary to “comply with all requirements in all worldwide jurisdictions to which we fly.”

From a purely business perspective, the decision makes sense. In April, the Civil Aviation Administration of China (CAAC) sent directives to all foreign airlines flying to China requiring them to “initiate a self-examination” of their websites and other publicity channels for references to Taiwan. They requested that all airlines, in accordance with Chinese law, classify Taiwan as belonging to China, with no parallel listing of “China” and “Taiwan.” The CAAC stipulated that all airlines who failed to comply within thirty days would be subject to disciplinary action according to regulations of the “Civil Aviation Industry Credit Management Measures” and the “National Cyber Information Office.”

To airline management, the cost of acquiescence probably seemed quite low and the costs of non-compliance frighteningly high. Although the CAAC has not made the legal consequences publicly known, the airlines surely fear that China could revoke their landing rights. This would create chaos in the short run, as airlines would have to rebook all ticketed passengers. In the long run, no company that has already invested heavily in the lucrative Chinese market wants to forego their expected profits. Air Canada is probably under greater pressure than other airlines because, according to CH-Aviation, the company is currently negotiating a joint venture with Air China. And, they are only following precedents set by other foreign carriers such as Lufthansa.

Airline administrators may even have been taken by surprise by Taiwan’s reaction. After all, the official name of the state on Taiwan is “Republic of China,” which means that China is part of the name of Taiwan’s Civil Aeronautics Administration. Taiwan’s own flagship carrier is called China Airlines. And every day, Air Canada employees check the validity of Taiwanese passports labelled “Republic of China.” The only reason that Taiwan has not changed its official name, which normally any country has the right to do according to their own laws, is that the current government wishes to avoid provoking China in order to simply maintain the status quo in peace. Apparently, China is not content with the status quo.

Yet, nowadays, everyone knows that “China” means “People’s Republic of China” and nothing more. Taiwan is simply Taiwan. Listing Taipei as China does not change that reality any more than if companies suddenly listed Tainan as part of the Netherlands. The Taiwanese people are obviously getting fed up with China’s bullying. Long-term polling by the Election Study Centre at National Chengchi University shows that the vast majority of Taiwanese prefer to maintain the status quo in some form, whereas a mere 2.2% support unification as soon as possible. If China were to relax their pressure on Taiwan, the conditions for unification may ripen at some time in the indefinite future. If Chinese intimidation forces Taiwan to declare official independence, the possibility of unification will be foreclosed forever.

Not everyone is willing to accept Chinese censorship. The United States, which must defend Taiwan according to the Taiwan Relations Act, reacted strongly and immediately. On May 5, the White House issued an official press release about the demands made to global airlines: “This is Orwellian nonsense and part of a growing trend by the Chinese Communist Party to impose its political views on American citizens and private companies … the United States strongly objects to China’s attempts to compel private firms to use specific language of a political nature in their publicly available content.” Nonetheless, airlines around the world have complied. The exceptions are notable. When I checked on May 23, United and Delta as well as Japan Airlines and ANA still listed Taiwan as a separate country. It looks as if the United States and Japan are resisting Chinese pressure. Canada seems meek by comparison.

No matter how airlines respond to Chinese requests, the consequences of the CAAC policy are very serious. If one or more airlines refuse to comply, the CAAC will have to enforce their policy through some kind of penalty, potentially disrupting air transportation between some of the most central parts of the global economy. But the risks are even higher if all foreign airlines comply. This would only embolden China to target other foreign websites, perhaps even those of universities. Our own freedoms and sovereignty are at stake, not just those of Taiwan.

It is especially disconcerting that China is going to such lengths to try to get the world to accept their territorial ambitions outside their current borders. Taiwan is only the beginning. China also claims parts of India and Japan, as well as nearly the entire South China Sea. When the world fails to stand up to such claims, it only strengthens the resolve in those segments of the Chinese Communist regime pushing for concrete, military action. The Canadian government must show the necessary resolve to protect democracy, at home as well as in the entire Indo-Pacific region.