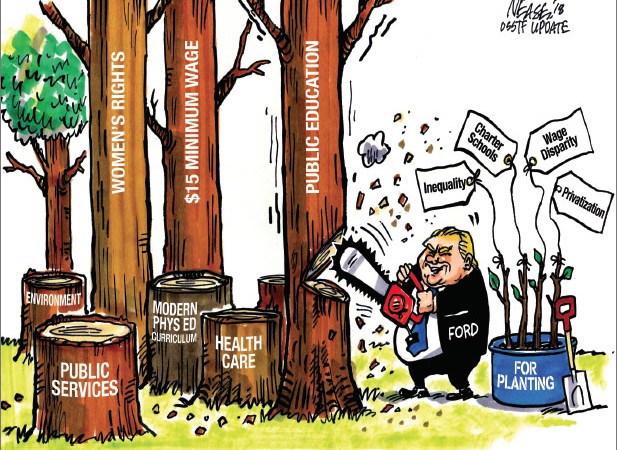 In the fallout from Doug Ford’s election as Premier of Ontario, two things have dominated public debate regarding climate policy. One, the provincial cap and trade plan along with the court case to stop the federal government from imposing a carbon tax on Ontario. Two, the spat over whether or not the provincial government has, like Harper before it, banned its public officials from mentioning the term “climate change.”

These both mask and reveal the deeper environmental struggle going on in Canada. Using the term “climate change” or not is of minor importance compared to the actual trajectory of emissions in Ontario. And compared to what Ford is likely to do in infrastructure, transport, and urban development policy.

Whether or not the federal government can impose a carbon tax on Ontario (as well as Saskatchewan and Manitoba, now joined by Alberta given the Trans Mountain legal decision), the tax was a relatively modest one, has been watered down in any case, and may be more so in the future. The general view from constitutional lawyers is that the federal government will win the court case launched by Saskatchewan.

However, a carbon tax was only ever going to set some broad economy-wide incentives. The heavy lifting is in how our cities are built, how our electricity system works, and how energy-intensive industry operates. The provincial government is important to all of these, and solely responsible for many of them.

The impact of Ford’s election on climate policy in Ontario — and by extension on Canada’s ability to meet its Paris Agreement obligations of 2015 — is really about how to pursue economic development in Ontario, especially in relation to electricity, transport, and buildings. Here, Ford’s government has been very active: They are in the process of cancelling 758 renewable energy contracts that the province had signed, including projects already under construction.

They have also cancelled the Green Ontario Fund, financed from the cap and trade program. The fund provided incentives for householders retrofitting their homes to improve energy efficiency, and investments in companies and public institutions for low-carbon-energy projects. These are the more important material consequences for Ontario’s climate policy than the cap and trade/carbon tax question, which will be settled by the courts in any case.

But the broader environmental-political implications of Ford’s election are just as important. Rather than simple pro- and anti-climate positions, there are three broad positions on climate change in Canadian politics.

One position resolutely accepts the need for climate action and understands that it must be transformative. This entails reorganizing the entire structure of the Canadian economy away from its current intensive fossil fuel dependence, coupled with a radical program of investment and public regulation to achieve that. It recognizes that to avoid doing so is to risk climate catastrophe, a “hothouse Canada.” This is the position of anti-pipeline activists, of divestment activists, of many First Nations working on climate change, and of the Leap Manifesto.

At the other end of the spectrum is the Ford/Scheer/Kenney/National Post position. Some either deny climate change explicitly (although Ford has not made such statements, at least not loudly), or deny it in the more diffuse sense of baulking at its implications for how the economy and daily life must be transformed. They see Canadian interests as intrinsically tied to the oil and gas sector, and their electoral interests tied to a specific set of largely suburban interests centred on large single-family homes and complete automobile dependence. Canada is almost unique now in the industrialized world where a politician can run on a platform of denying the need for climate action and still win. Obviously, this still works in the United States as well.

In between these two positions sit Trudeau and Notley, who have given themselves the unenviable job of attempting to address climate change while still expanding an economy based on oil and gas. This was most dramatically exemplified by Trudeau’s nationalization of the Trans Mountain pipeline. Both claim to have effected emissions modestly in the short term, although we must wait to see how much the fallout of the Federal Court of Appeal decision on Trans Mountain affects this.

Ford has put great pressure on the Trudeau/Notley position. Both progressives and conservatives have argued that Ford shows up Trudeau’s climate policy for the sham it is. Progressives argue that, in practice, Trudeau’s and Ford’s positions are quite close since Trudeau is not ready to implement the transformational policies that climate change requires. Conservatives agree that behind the spats over carbon pricing, the federal government’s policies dishonestly claim to affect Canadian emissions, even while they cause pain to Canadian consumers.

The question, then, is which way Trudeau will turn. Will he cling to the present incoherent position, shift back to a purely rhetorical position (as in the Chrétien government), or realize the need for a bolder, transformative climate policy? This matters not only for climate change but also for Canada’s place in the world. Canada’s failure to play a positive role in international climate politics during the Chrétien, Martin, and (especially) Harper years did us significant reputational and material harm. Our newfound positive international standing regarding the Paris Agreement — and more recently in leading the Powering Past Coal Alliance — could be easily destroyed. In the battle of Ford versus the environment, we can only hope that the latter prevails.

"If the stars align in proper fashion, the year 2023 promises to be key for decisions about Global Affairs Canada and the Canadian foreign service." Explains Daniel Livermore in a recent blog for CIPS (first published by the McLeod Group). Read here: https://www.cips-cepi.ca/2022/08/10/reform-of-global-affairs-canada-version-2023/

With great sadness, I am restarting my CIPS blog series with a tribute to Japan's late prime minister Abe Shinzō. He will be missed. https://twitter.com/uOttawaCIPS/status/1546593643112398854