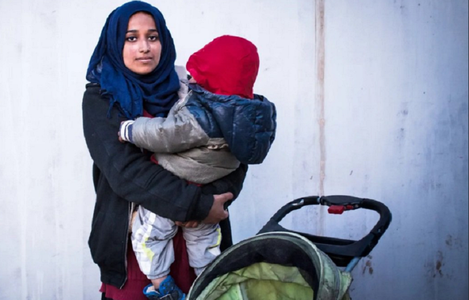 Shemima Begum, Hoda Muthana (pictured here with her child), and Kimberly Gwen Polman want to go home, but their home countries of the UK, the US, and Canada are so far denying them re-entry.

So-called jihadi brides are in the news, accused of supporting terrorism by having travelled to ISIS territory to marry ISIS fighters in support of the caliphate. Three Western states are implicated: the UK, the US, and Canada.

UK citizen Shemima Begum left the UK four years ago, when she was 15 years old, and surfaced last month at a Syrian refugee camp, heavily pregnant. US citizen Hoda Muthana, then a college student, left the US four years ago, using her tuition money to buy a ticket to Turkey, from which she was smuggled into ISIS territory. She is now detained in refugee camp in northeastern Syria. Kimberly Gwen Polman, born in Hamilton, Ontario, is a dual Canadian–US national who converted to Islam. She became persuaded by a Syrian fighter online that her incipient nursing skills would be of great value to the caliphate. She left the US in 2015 to join the caliphate, only to attempt to escape nearly a year later. But then she was jailed (and raped) and forced to sign a document acknowledging that if she were to attempt escape again, her punishment would be death. All three women have publicly announced their desire to return home this week.

The UK government reacted swiftly, announcing its intention to remove the citizenship of Begum, thereby denying her the right to return home. Recent official statements suggest UK authorities believe she is entitled to Bangladeshi citizenship, so revoking her British citizenship will not result in statelessness. US President Donald Trump announced over the weekend that all states should be ready to repatriate (i.e., bring home) and punish their “own” foreign fighters, but then tweeted that he had directed Mike Pompeo “not to allow Hoda Muthana back into the Country!” Canadian officials have been relatively quiet on their intentions. A spokesperson for Public Safety Canada stated only that “The government is aware of some Canadian citizens currently detained in Syria. There is no legal obligation to facilitate their return.”

These cases are not identical. Begum was a child when she left the UK and is now a mother to a newborn baby boy. Muthana’s choices were exacerbated by her use of social media to celebrate and encourage violence. Polman is known to suffer from post-traumatic stress disorder. What they share is the right to return home to face trial and punishment in their countries of citizenship.

All states have justice systems in place so that suspected wrongdoers can be tried and punished. Democratic justice systems are those that respect due process rights: the rights to a fair trial, including adequate legal representation, which permits the relevant evidence to be adjudicated by trained judges and, where relevant, juries of their peers.

It is conventional to say that citizens must be presumed innocent until proven guilty, and this convention holds even where there appears to be incontrovertible evidence of guilt. Its purpose is to allow the possibility that what looks like a slam-dunk case is murkier upon examination, to ensure that in collecting evidence all of the rights of the accused were respected, and furthermore to allow for the presentation of extenuating circumstances that can complicate what seems like a simple guilty verdict.

There is more to criminal justice in democracies, moreover, than how the accused are treated during the trial phase. The punishments must also meet democratic criteria. It is a principle of punishment in democratic states that any citizen, no matter how criminal, must be treated as someone who can re-enter the community of equals from which she was temporarily excluded by punishment. This principle is why the death penalty must be rejected. It is also why denationalization must also be rejected.

Denationalization of terrorists, the process of revoking citizenship from those suspected of terrorist activities, is gaining in popularity in democratic states, who are rushing to prove they are tough on terror. Denationalizing terrorists is good politics.

Nevertheless, denationalization is unjust and undemocratic. It permits states to abandon citizens who are entitled to their protection in dangerous locations, in principle free to commit additional crimes. The Trudeau government recognized as much when it overturned the parts of the Strengthening Citizenship Act that permitted the revocation of citizenship. Weaselly words stating that Canada is not under the obligation to facilitate the return of suspected wrongdoers reveal an unwillingness to stand by the commitment implied by Mr. Trudeau’s now famous statement, “A Canadian is a Canadian.” Canadians, even criminal Canadians, are entitled to have their rights protected by Canada.

By revoking citizenship, states punish citizens suspected of criminal activities by banishing them, in advance of conviction. They treat them as unworthy of having their rights protected, as beyond the pale, rather than as individuals who in time can learn the error of their ways. These women must be returned to their states of citizenship so that we, their fellow-citizens, can judge their actions and, if appropriate, witness their just punishments.