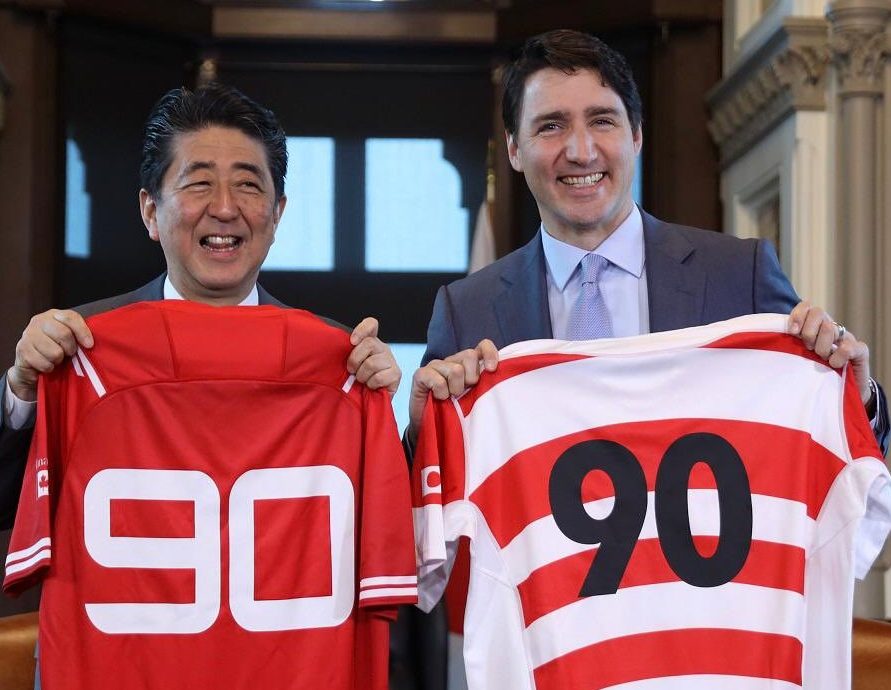 In preparation for the Rugby World Cup, Trudeau and Abe exchanged rugby jerseys to recognize 90 years of diplomacy between the two countries.From the website “Prime Minister of Japan and His Cabinet” https://japan.kantei.go.jp/98_abe/actions/201904/_00045.html

A new era is dawning in Japan. With the abdication of Emperor Akihito on 30 April and the ascension of his Crown Prince Naruhito to the Chrysanthemum Throne on 1 May, calendars will change from the 31st year of the Heisei (平成) to the 1st year of the Reiwa (令和).

The new era name breaks with ancient tradition, being the first time that the era phrase comes from Japanese literature rather than from Chinese classics. Rei means “auspicious” and “orderly,” and wa means “peace.” It comes from the Man’yōshū (万葉集), Japan’s oldest anthology of poetry, compiled around 759 AD. To Japanese poetry aficionados, the verses evoke images of plum blossoms and warm breezes. The Japanese government has explained that the meaning is “beautiful harmony.”

This cultural context gives meaning to the end-of-April journey to Europe and North America of Japanese Prime Minister Shinzo Abe, who is preparing to host the G20 summit in Osaka in June. The fact that Abe visited Ottawa in the final days of the Heisei period demonstrates the priority he gives to Canada.

By all measures, the Canada–Japan strategic relationship has been steadily gaining momentum. Trade is beginning to blossom with the entry into force of the Comprehensive and Progressive Trans-Pacific Partnership (CPTPP). Canada and Japan have also deepened co-operation on security issues, with the signing last year of the Acquisition and Cross-Servicing Agreement between the Canadian Armed Forces and Japanese Self-Defence Forces, joint military exercises, and Canadian aid in addressing North Korea’s illegal ship-to-ship transfers.

Prime Minister Justin Trudeau was an enthusiastic host, even as the nation’s capital was suffering from historical flood levels. He received Abe with a full guard of honour at Parliament on Sunday after hosting him to a Saturday dinner at the Prime Minister’s Meech Lake retreat. Building on the momentum of the CPTPP, the two leaders signed two new agreements.

The first, between Invest in Canada and the Japan External Trade Organization, will facilitate investment between the two countries. The second, signed between the National Research Council of Canada and the Advanced Telecommunications Research Institute International of Japan, will support research on robotics and telecommunications. On a lighter side, in preparation for the Rugby World Cup, Trudeau and Abe exchanged rugby jerseys to recognize 90 years of diplomacy between the two countries.

At a time when both Canada and Japan are adjusting to import tariffs from the Trump administration, this visit allowed Canada and Japan to highlight their strategic relationship. Trump’s withdrawal from the CPTPP gives Canadian exporters an edge as they benefit from deeper and earlier tariff reductions in agriculture, fish and seafood, industrial goods, and forest products. Canada took advantage of Abe’s visit to announce a long list of new commercial and industrial collaboration with Japan. Friction in the US–Canada relationship has pushed Canada closer to Japan.

The main elephant in the room seems to have been China. CBC News reporter Elise von Scheel even pointed out that Trudeau accidently referred to Japan as China twice in their joint news conference. The two sides discussed potentially increasing canola sales to Japan to compensate for the recent Chinese cancellations in Canadian canola purchases. The two leaders also discussed the situation of Canadians Michael Spavor and Michael Kovrig, detained in China since last December. Since Japanese citizens are regularly detained in China, Japan can offer support and propose strategies on this issue.

With continuing tensions on the Korean Peninsula and aggressive Chinese posturing in the East and South China Seas, security and defence issues were highlighted. The two leaders expressed their joint commitment to a Free and Open Indo-Pacific. Trudeau announced that Canada would continue to allocate Canadian Armed Forces to Operation NEON, a multinational initiative to enforce sanctions against North Korea. Canada will also provide funds to the International Atomic Energy Agency to monitor North Korea’s denuclearization. As for Canada’s goals in this hemisphere, Japan announced its endorsement of the Ottawa Declaration on Venezuela.

Japan’s new era name — combined with Abe’s pro-active diplomacy — sent clear signs to domestic and international audiences that Japan is back. Bilateral relations between Canada and Japan are based not only on shared economic interests, but also on shared commitment to a rules-based international order, inclusive growth, gender equality, and a desire to fight both climate change and violent extremism.

Canada and Japan are rapidly becoming close allies, just as we were in WWI. The advantage of cultivating alliances between democratic societies, rather than currying favour with authoritarian regimes, is that private sector relations grow more naturally and are less subject to arbitrary political interference.

The Reiwa era carries hopes for sustainable peace. But with new risks emerging from North Korea as well as in the East and South China Seas, this aspiration must be attained through vigilance and deterrence. France showed its commitment even before Abe’s tour by sending the warship Vendemiaire through the international waters of the Taiwan Strait on 6 April. This shows that the Taiwan Strait is part of the global maritime commons, and not merely a stage for Sino-American military competition.

Abe used his trip to shore up even greater support for mutually beneficial Free and Open Indo-Pacific initiatives. Canada is also being called upon to contribute more to defence and security. A return to this kind of multilateralism — for which Canada once earned its reputation in Pearson’s era of peacekeeping — will require greater investment and commitment to the Canadian Armed Forces.

Abe returned to Tokyo just in time for the Imperial transition. As Japan’s calendars change to the new epoch, it is a time to celebrate and nurture our emerging strategic partnership. During the visit, Trudeau declared, “Canada and Japan are close friends and allies who share not only many common values, but many common priorities.” Our joint commitment to a Free and Open Indo-Pacific based on peace, democracy, and free trade is an appropriate way to begin the new Reiwa era.

Scott Simon, Ph.D., is Professor in the School of Sociological and Anthropological Studies, Co-holder of the Chair in Taiwan Studies, and Researcher at CIPS, University of Ottawa. Proficient in both Mandarin Chinese and Japanese, he has conducted research on various social and political issues in China, Taiwan, and Japan. He is the author of three books about Taiwan.