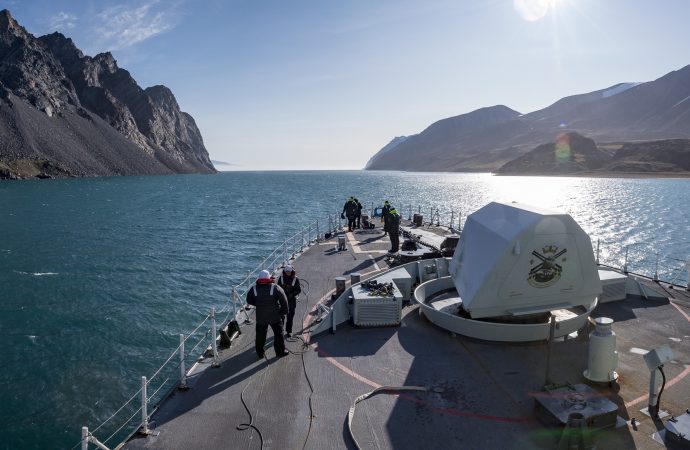 The Canadian government depends radically on the permanent population of Inuit and other Northerners … but, those Northern communities live with less.

I was on the lookout for Russians when I should have been looking for icebergs. As part of HMCS Ville de Quebec‘s (VdQ) mission to sail from Nuuk, Greenland to test out the Nanisivik Naval Facility on northern Baffin Island, Nunavut, I had thought that the most significant drama would be Russian submarines below or long-distance fighter-bombers overhead. But it was a 50km wide ice floe that was the most frightening challenge the ship and its crew faced. Growlers – and less than 1 m above water, but just as dangerous as their big brothers – spun and cracked and threatened to open up the sides of the VdQ: a tuna can bobbing about in a sea of can openers.

From its inception, Canada’s assertion of sovereignty in the Arctic was complex.

For 45 terror-inducing minutes, the Captain dashed from flybridge to flybridge shouting helm and throttle commands to the crew as the 135-meter frigate inched out into safer water.  As a professor of international relations and a student of security, geopolitics, and the Arctic, I had assumed that other states would contest Canadian sovereignty. New Russian nuclear icebreakers and China has recently declared itself a near-Arctic nation. But, at the end of a week doing a ride-along with a sovereignty patrol with the Royal Canadian Navy, it became clear that logistics are the most significant challenge to Canada’s sovereignty in the North.  I have always been fascinated by how these abstract principles like security and sovereignty are exercised in practice and so I was very excited when I was invited by the Royal Canadian Navy to participate in the Canadian Leaders at Sea programme.

From its inception, Canada’s assertion of sovereignty in the Arctic was complex. Starting with wildlife and hunting regulations in 1919 that were set down in defence of Canada’s claim to Baffin Island concerning Danish hunting when the winter ice meant you could walk across the Davis Strait from Greenland. Creating RCMP outposts, deputizing Canadian Rangers, and establishing military bases like Resolute and the DEW Line, military and constabulary activities were always accompanied by non-military policies, the multifaceted missions of the Eastern Arctic Patrol which started in 1920 and the Eskimo Number Disk policy. The legal definitions of the Northwest Passage as an international strait, archipelagic waters or as internal waterways, was prompted by American ships like the Polar Sea transiting without permission in 1985.

And so, when Prime Minister Stephen Harper stated at Nansivik in 2007, “Canada has a choice when it comes to defending our sovereignty over the Arctic: either we use it or we lose it,” it was not just a domestic message about national solidarity and core values but also a message to international competitors (notably the Chinese, the Russian and the Americans). As a senior military commander stated in 2018: “The notion that Canadian sovereignty is under threat, I think it’s alarmist to suggest that’s the case,” however “sovereignty ignored is perhaps sovereignty lost. And from a defence perspective, our key interest in the North is maintaining an awareness of what’s going on up there.” Maintenance, awareness, presence, all require overcoming the actual logistical challenge of getting and staying there.

The refuelling station at Nanisivik Naval Facility and the Arctic Offshore Patrol Ship (AOPS) programme represents the fruition of that effort to build out the capacity of the Canadian Forces, supplementing the approximately 1800 strong Canadian Rangers, the Air Force’s four Twin-Otter planes, and the small Army outpost at Alert and resolute. The result of these forces is a mission-profile like Operation Nanook.  Canada’s Halifax-class frigates have a short operating window in the North of mid-August to mid-September and a relatively short-range constrained by refuelling and ice conditions. The AOPS will expand that window from mid-June to late-October. While the frigates like VdQ were designed in the 1980s for anti-submarine warfare in the North Atlantic against the then-Soviet threat, the AOPS have ice-hardened double-hulls, capacity for more passengers but need a smaller operating crew, space for zodiacs, trucks, ski-dos, and other tenders, and a helicopter hanger for coordination with Coast Guard. Again, it is the logistics that make the actual practice of sovereignty possible.

The Canadian government depends radically on the permanent population of Inuit and other Northerners in settlements like Pond Inlet, Arctic Bay and Grise Fjord – not just in the legal sense that permanent population and governance are two of the characteristics of sovereignty, but also in the sense that Inuit and Northern populations bear the brunt of the logistical challenges of living in the North: a lack of developed infrastructure, a distorted market for goods and services, food insecurity, challenges to health and education provision are typical of life in the North. Were Inuit communities to achieve the same health, education, poverty or governance indicators that Southern Canadian communities provided with, the cost would be high. But, those Northern communities live with less. Recent media reports, for example, noted that girls were using socks as pads because feminine hygiene products were too expensive, although the Nutrition North programme has just allowed those products to be subsidized. To make a simple “guns or butter” argument, I do wonder about the cost of the Nutrition North Programme ($99M for 2018-2019) and the budget for the AOPS program ($4.3B, not including taxes).

The Canadian government depends radically on the permanent population of Inuit and other Northerners in settlements like Pond Inlet, Arctic Bay and Grise Fjord

As a guest on the Ville de Quebec, I was struck by the care expressed by the leadership team for the morale of the sailors and officers. Close attention was paid to the creature comforts like food, entertainment, and a sense of community and purpose, because the Captain, his officers and the Navy itself, understand that life aboard ship is difficult, being separated from family and friends is hard and being under constant stress is emotionally taxing. And, when going ashore to Pond Inlet, I wished for more of that VdQ ethic of care for the long-term denizens of the Arctic.