The Coronavirus Crisis: The De Facto Quarantine of Taiwan 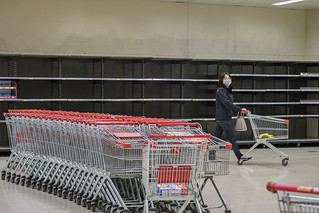 The risk of a global pandemic coming from China is attracting a lot of attention, but it is important to avoid giving way to hysteria. Canada and the international community should stand firm in support of Taiwanese rights to participate in the WHO’s crisis response.

Images of panicked citizens, of overwhelmed physicians facing a nervous breakdown in the city of Wuhan, have circulated on social media. Of course, our hearts should go out to the people who experience anxiety over this epidemic, whose severity generates genuine concern the world over, as reports have emerged of people infected in other countries, including Canada. This crisis is reminiscent of the SARS outbreak of 2003. Then the world came close to experiencing a major pandemic. However, a cover-up from some in the Chinese government delayed the reaction. In the end, however, a decisive response from both China and the international community prevented a major crisis. The Chinese government claimed afterwards to have learned its lessons.

Yet, as this coronavirus grows and as the evidence of a cover-up of the outbreak occurred last December, there may be reasons to be suspicious of declarations coming from Chinese authorities. The outbreak of the present coronavirus crisis has generated a mix of reassuring words from the Chinese government and wild rumours similar to the one that occurred in the 2003 crisis. As the Chinese central government puts into lockdown the city of Wuhan, as well as the neighbouring ones of Ezhou and Huanggang, the suspicion has grown that the pandemic is worse than initially disclosed and that the numbers for people infected are under-reported. These developments happen as reports surface of people in Beijing, Shanghai, and Hong Kong affected by the virus. Almost every province in China has reported cases. This should not surprise, as this outbreak coincides with the annual Spring Festival, a time in which people move around throughout the country to reunite with family. Like other infectious diseases, this outbreak ignores borders, and it has spread worldwide. The global scientific community, however, has quickly worked to dispel the wildest rumours.

Nevertheless, in a gesture that acknowledges the severity of the problem as well as promotes its capacity to address this crisis, the World Health Organization (WHO) has urgently requested that countries share information according to the International Health Regulations.  As the WHO convenes an emergency committee to deal with this crisis Taiwanese experts are barred. China is preventing these experts from participating in that event because it claims jurisdiction over Taiwan. According to that logic, the Chinese government is responsible for the health of Taiwanese citizens and Beijing should have the final say in determining who could attend the WHO meeting as a representative of China. However, this claim from the Chinese government is evidently flawed.

China does not accredit the medical personnel in Taiwan, and PRC authorities do not contribute to the budget of Taiwanese health care. The health authority in Taiwan is the Ministry of Health and Welfare (MOHW), whose head, Minister Chen Shih-chung, was re-appointed by President Tsai Ying-wen after her re-election this January. It has nothing to do whatsoever with the National Health Commission in Beijing. Finally, the delivery of health care services to Taiwanese falls under the responsibility of the National Health Insurance paid for by taxes paid by Taiwanese.

Recommended: An Unequivocal Victory for President Tsai in Taiwan

As the Chinese government deploys colossal efforts to manage the outbreak within the territory that it controls, the world community supports its effort to control the spread of that epidemic. However, it should also cooperate with the Taiwanese government effort to do likewise in the territory that it governs. Since the founding of the People’s Republic of China, in 1949, the claim by the Chinese Communist Party that Taiwan ‘belongs’ to China qua the PRC never had any basis in reality. The claim that the PRC should be responsible for the lives of a population that it does not administer is absurd. Taiwanese have governed their own affairs for more than three decades since the lift of martial law. When the PRC denies the democratically elected Taiwanese government the right to cooperate with its counterparts in a circumstance, it interferes in the domestic affairs of a sovereign country. Moreover, that the Chinese government forbids the international community to cooperate with Taiwan, in the context of a major international crisis, amounts to the de facto quarantining of a population of 23 million people.

At a time when the world is facing a major crisis, the attitude of the Chinese government endangers the health of Taiwanese citizens.

At a time when the world is facing a major crisis, the attitude of the Chinese government endangers the health of Taiwanese citizens. Considering the numerous interaction between Taiwanese and Canadians, and the spread of the coronavirus in Taiwan and Canada, it is in Canada’s national interest for Taiwan to be included by the WHO in its crisis meetings. Prime Minister Trudeau has approved in principle the participation of Taiwan as an observer in the WHO meetings. This is a step in the right direction. However, Canada would be wise to follow in the footstep of Japan, whose Prime Minister Abe declared that the participation of Taiwan in the WHO is necessary to fight the spread of the coronavirus infection. As the association responsible for the promotion of global health, there is no reason for the WHO to exclude a nation of 23 million people. Although China would protest a move towards such inclusion because of its claim to rule Taiwan, the WHO would truly fulfill its mandate of promoting health without discrimination if it recognized the simple fact that the Chinese claim has no basis in reality. The Taiwanese people have proven that again in the general election of last January, as they re-elected their own President and renewed their legislature.