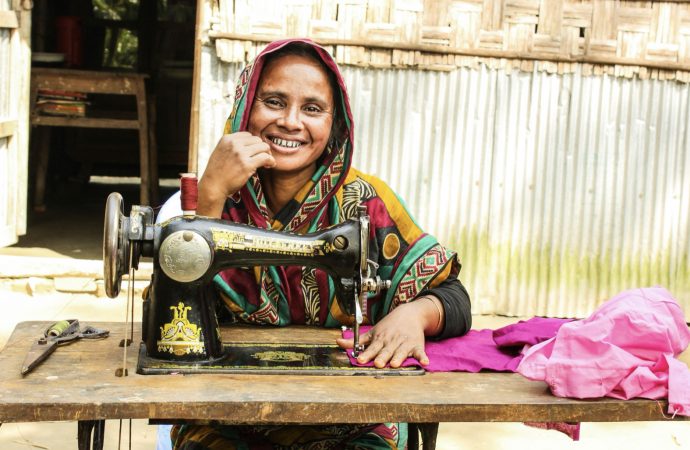 In a village of northern Bangladesh lives Nasima, 26 –  a victim of child marriage who was abandoned by her husband and left with two children. She lived in extreme poverty until the local village council offered her the opportunity to take up auto-rickshaw driving,  providing passenger transport services. The community council marked her vehicle as women only to avoid an adverse reaction from other villagers.

Still, initially, the community shunned the unusual sight of a young single mother driving a three-wheeled auto-rickshaw.  Nasima speaks of the very early days when local passengers felt uncomfortable riding with a female driver, apparently fearing accidents. Yet, she persisted with determination,  assuring the locals that she would provide the same safety and comfort as do male rickshaw-wallas.

Gradually the passengers gained confidence and started riding with her. As her business took off, she succeeded in getting her family out of poverty and inspired others with her success. She now earns approximately $500 a month, which covers two meals a day for her children and costs of clothing, medicines, and schooling. Nasima’s daughters are proud of their mother for taking up an extraordinary profession not tried by other women. Nasima is now planning to buy a pick-up van to increase her income.

Nasima has emerged as a role model for her determination. Other women consider her as an example in society. They say that her courage to pursue income generation by taking up an unconventional profession has given the village women a new perspective on their identity. Women have been inspired to join her in the streets as rickshaw-wallahs, raising income for themselves and their families. The economic face of these villages has changed as women’s income generation programs have taken a foothold.

There are other examples. The garment industry,  often critiqued as a worker exploiting industry, is championed by the female workers as their lifeline. Despite working in repressive conditions and for low wages, the female factory workers repeatedly say that factory jobs are economically and socially beneficial. They claim that their employment at sweatshops has changed the rural social scene.

My research concludes that women coming out of their isolated, remote villages and travelling every day to the big metropolises where garment factories are located get opportunities to socialize with workers from other communities. This enhances the quality of the rural workers’ social lives and boosts the marginalized rural women’s economic solvency.

Women working in sweatshops usually earn better wages than in many other jobs. These incomes empower women to satisfy their families’ most basic needs and live with dignity in the community.

BRAC, an international NGO with its origin in Bangladesh, started targeting women living in extreme poverty in the urban slums and helping them walk out of poverty.

In Bangladesh, close to 2.23 million people live in slums. The women slum dwellers often endure fragile and insecure livelihoods, working in petty trades, low-skilled jobs and menial labour while facing perennial hardships and numerious hurdles to transitioning out of poverty. BRAC offers to the ultra-poor women in urban slums locally relevant market-driven solutions to shift them to more secure and sustainable livelihoods.

This works in the following way: a productive asset, suitable for an urban area (examples range from grocery stands, tea stalls, fish, vegetables, fruit vending stalls, and small-scale clothing shops), will be provided along with training for asset management and saving to maximize the business investment return.

Further, training for consumption support to promote food security and meet the family’s basic needs is provided in the initial period.

This process enables steady streams of revenue for the women as the small business ventures take off. The multifaceted program makes the women’s transition to a sustainable livelihood realistic.

The success stories are myriad. For example:

In many instances, increased incomes enable the women to support the children and husbands and the extended families- parents and siblings. One woman proudly relates the story of buying a cycle rickshaw for her husband, whose business has helped to increase the family income several times.

The programs for the ultra-poor can build a sense of community as working women gain the urban public and the rural communities’ attention.  The community support that is built through these programs is also life-altering.

Whether through work in the garment industry or year-round rural road maintenance, vending passenger services, or engagement in petty trades such as vending tea, fruits, and other consumable items in the city streets, the income flow is empowering women both socially and economically. It is clearing the path for Bangladesh to reach the first target of the Sustainable Development Goal: eradicating extreme poverty for all by 2030.

The ultra-poor households in rural and urban settings who depend on insecure and fragile livelihoods, such as casual farming in the rural areas and domestic labour in the cities with irregular and seasonal incomes, cannot transit out of poverty without organized support. In Bangladesh, multifaceted programs that foster a sustainable transition of ultra-poor women to secure livelihoods are operated, with BRAC taking the lead in the introduction and successful operation of such programs. The indications are that the ultra-poor women will be at the forefront of Bangladesh’s march to eradicate extreme poverty by 2030.

On December 30, 2020, abortion became legal in Argentina 🇦🇷up to the fourteenth week of pregnancy. What's the background to this radical change? Read
@giselle_carino's great new blog on 🌐CIPS to find out @ippf_whr https://www.cips-cepi.ca/2021/04/21/abortion-and-rights-in-argentina/

What are Russia's interests in the Arctic for the next 2 years? What are key debates that other Arctic states will face as a result?
For answers to these questions, join us for a webinar next Thursday: https://www.cips-cepi.ca/event/what-to-expect-from-the-upcoming-russian-chairmanship-of-the-arctic-council/
@NAADSN_RDSNAA @uOttawaCIPS @OPSArctique

What are Russia's interests in the Arctic for the next 2 years? What are key debates that other Arctic states will face as a result?
For answers to these questions, join us for a webinar next Thursday: https://www.cips-cepi.ca/event/what-to-expect-from-the-upcoming-russian-chairmanship-of-the-arctic-council/
@NAADSN_RDSNAA @uOttawaCIPS @OPSArctique