Event Report: Discussion on the Will to Intervene

On September 24, CIPS (in conjunction with the Montreal Institute for Genocide Studies at Concordia University) presented a panel discussion in honour of the Will to Intervene Day, which was proclaimed in the City of Ottawa by Mayor Jim Watson. It featured a distinguished panel of experts including former U.N. Ambassador Paul Heinbecker, former M.P. David Kilgour, University of Ottawa Professor Errol Mendes and CBC journalist Evan Solomon as moderator. 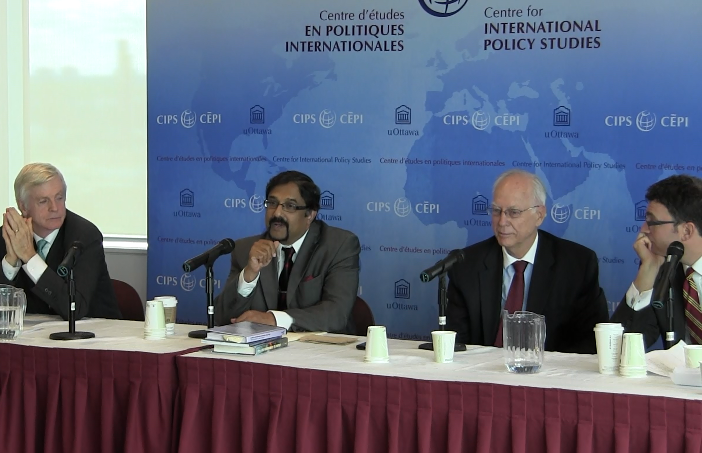 The panellists were in broad agreement that the Responsibility to Protect (R2P) doctrine, which Canada led in articulating over the past decade, is an indispensable international norm that mandates intervention when nations cannot or will not protect their populations from grave danger. In the words of David Kilgour, R2P offers “the best hope for ‘never again’” following the world’s failure to intervene in the 1994 Rwandan genocide.

Given the panellists’ agreement on the legitimacy and urgency of R2P, the discussion focussed on hard cases and challenges to the norm’s implementation. In response to Evan Solomon’s question whether the world’s current non-intervention in the Syrian civil war undermines the legitimacy of R2P, Paul Heinbecker asserted that an intervention would have already occurred were it not for (a) the U.S. Presidential election and (b) the efforts of countries such as Brazil and India to ‘roll back’ R2P following its invocation to effect the recent regime change in Libya.

For his part, Errol Mendes pointed out that Syria is a very hard case for current R2P intervention, due to the tri-level proxy war unfolding there. Yet the world has grave accountability for the failure to prevent the current conflict—a responsibility at the heart of R2P. While acknowledging the complexities of the Syrian situation, Heinbecker similarly asserted that the certainty of over 30,000 casualties to date—as weighed against the unknown costs of intervention—tipped the balance of considerations in favour of intervention. And Mendes agreed that after the U.S. election there ought to be a proportional response in Syria—at least a no-fly zone to force a ceasefire—despite the potential to incite a regional conflagration.

A second major theme of discussion posed by Solomon was the question of how the world should respond in face of multiple civilian catastrophes unfolding not just in Syria but in places such as Darfur, Congo and Sudan. Following Heinbecker’s concession that no governments or peoples are willing to undertake an open-ended commitment to intervene everywhere, Mendes pointed out that the responsibility to prevent mass atrocities before they occur should be regarded as the core of the R2P imperative.

This topic of prevention led into a discussion of what Canada can do to advance the cause of R2P. Mendes suggested that Canada could lead in offering ‘early wisdom’ about potential atrocities that could then be prevented through international response. Following the remarkable role of technology in galvanizing youth participation in the Arab Spring uprisings, he added that the potential of technology to generate the will to intervene ‘from the bottom up’ among youth deserves further study.

➡️Canada and the African Union: Towards A Shared Agenda

Join us next Monday, February 13th at 1pm for a talk by @debthompsonphd, titled "Roots, Routes, and Reckonings: On Blackness and Belonging in North America". @PhilippeMFrowd will moderate event.

Happening now at @uOttawaCIPS: @svhlatky is talking to us about her great new book "Deploying Feminism" on gender and NATO military operations, with Canada's former NATO ambassador, @kerry_buck, as discussant...