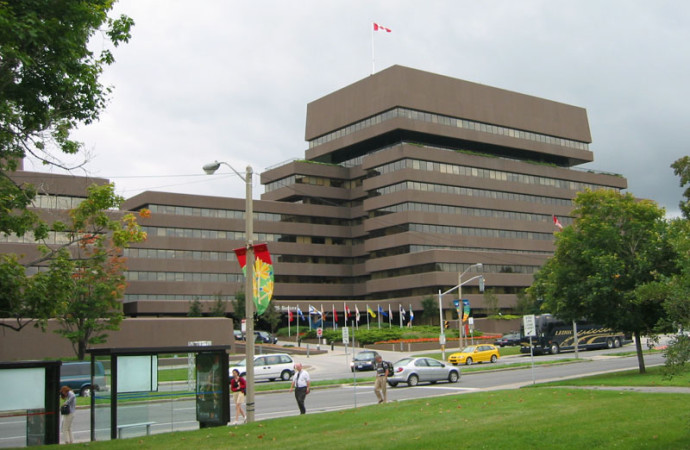 A series of foreign ministry memos, leaked to the media in recent days, offer an unflattering assessment of Canada’s declining international influence and reputation. They are apparently draft “transition” documents, which the federal bureaucracy prepares before every election.

Some defenders of the Conservative government quickly took to social media and assailed the Department of Foreign Affairs, International Trade and Development (DFATD). The acting Comment Editor of the Toronto Sun, for example, tweeted:

Gutless? War? Think about those words. Goldstein seemed to be suggesting that both the content of the leaked documents, and the very fact that they were leaked, represented an attempt by the foreign ministry to damage the Conservative government.

But there is no evidence to back up this charge.

Yes, there have been tensions and a measure of mutual distrust between the Conservatives and DFATD over the years. In my experience, however, if there’s one attribute that characterizes officials in that ministry, including at senior levels, it’s their professionalism. They understand that they are public servants, and that their job is to serve the democratically elected government.

Part of this job is to provide information and advice to elected leaders. That’s generally true, but it is especially true during transitions. As I mentioned in a Canadian Press interview yesterday:

Our public service, including the foreign ministry, has a mandate and a responsibility to provide every new or re-elected government with a full, unvarnished and private assessment of the strategic environment and options for Canadian policy.

Canadians need their public service to do this, because the federal bureaucracy remains the biggest repository of public policy expertise in the country. Governments, regardless of political stripe, must be provided with the best analysis their departments can produce, including policy options to consider. Once this advice has been delivered, the public service then performs the other part of its job: implementing the decisions of its political masters.

Importantly, these transition documents are not intended for public consumption. They are private advice. It is, therefore, only fair to assume that their authors were not seeking to embarrass the government, but to provide the best possible analysis to their new minister, whoever that person might ultimately be.

These officials owe two things to the incoming foreign minister: honesty and loyalty. Honesty in describing the situation Canada faces in the world (including in transition memos). And loyalty in executing his or her wishes.

So it is not only baseless, but also scurrilous, to conclude from these leaks that “Foreign Affairs” is at “war” with the Conservative government. If anything, these documents show that the foreign ministry is doing its job of preparing for the upcoming transition.