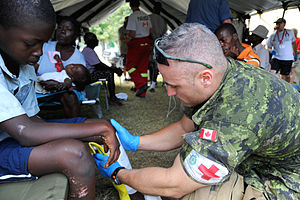 The Liberal government released on Friday its much anticipated policy on peace-support operations. On paper, this is good news. In practice, it is disappointing: Remove the hype, and the new policy mostly amounts to tinkering with what was already in place.

The policy is built on three pillars. Foreign Minister Stéphane Dion, first, announced the creation of a Peace and Stabilization Operations Program, with a budget of $150-million a year. It will coordinate whole-of-government responses to conflicts and crises around the world and will support targeted stabilization projects in fragile and conflict-affected countries. It will, in addition, include an early warning system to better detect conflicts, presumably a critical tool for Canada to more constructively engage in conflict prevention activities. Overall, the program has the very laudable goal of reinforcing Canada’s capacity to participate in peace operations.

Second, the Minister of National Defence, Harjit Sajjan, confirmed that the Canadian Armed Forces will, on top of existing commitments in the Middle East, Eastern Europe, and elsewhere, deploy up to 600 troops to an additional UN peace support operation. This new mission, to be announced in the fall, will likely be in Mali, the Central African Republic, South Sudan, or the Democratic Republic of the Congo.

And third, Ralph Goodale, the Minister of Public Safety, announced the renewal of Canada’s existing program supporting the deployment of up to 150 police officers to various peace operations.

This is, on the surface, good news. Canada should commit to these three sets of activities, and there is a need to boost existing capabilities. If implemented in a coherent manner and in the pursuit of specific Canadian interests, there is much for Canada to gain. There is, moreover, a glaring need, in parts of Africa and other conflict areas, for countries like Canada to step in with such niche capabilities.

The problem, however, is that when one scratches beneath the surface, it becomes apparent that there is little new in this package of initiatives.

Most disappointingly, the new Peace and Stabilization Operations Program merely replaces Global Affairs Canada’s existing — and quite successful — Stabilization and Reconstruction Task Force (START) while only slightly modifying its mandate. It does not even significantly increase its baseline funding. Canada, in other words, will unfortunately not be able to do much more in post-conflict reconstruction and stabilization.

Even the early warning system to detect conflicts, a favourite of Mr. Sajjan, is mostly smoke: various units in the intelligence community and in Global Affairs Canada already do this. It is also not clear how much impact this unit could have: most conflicts in recent decades have been a surprise to most observers, while a better informed Canada, as a mid-sized country, can still only follow the lead of its more powerful allies.

What is also disappointing is that the government did not clearly explain how all of this is in Canada’s interest. It seems to assume that “doing” UN peace operations is intrinsically good, which is at best simplistic. Peace operations are a means, not an end. Canada should definitely be more involved, but on a case-by-case basis and provided that individual commitments are in its interests. Friday’s announcement said little, in particular, on how the forthcoming decision regarding a mission in Africa will be made.

In sum, this is mostly old wine in a new bottle. The government’s intentions are good, but this new peace operations policy is a missed opportunity driven by a lack of imagination and ambition.

This article was originally published on 26 August 2016 in the Globe and Mail.

Join us on April 19th at 6:00pm for a panel titled "Peace with Justice in Colombia" with @authorwadedavis, Paola Jiménez and Nelson Ovalle Diaz. Co-chaired by Stephen Baranyi and Kimberly Inksater.

Potentia, our graduate student journal is accepting paper submissions for the 2021 edition of the journal!