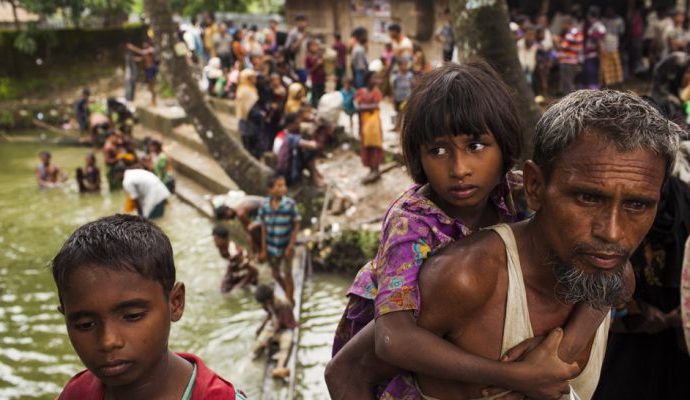 Pictured here are just a few of the million Rohingya refugees residing in Bangladesh. One refugee camp — the “Mega Camp” in Kutupalong-Balukhali — shelters a population of 600,000, about twice that of Halifax, Nova Scotia.

In a recent CIPS blog — New Partnerships for Minister Monsef? — John Sinclair asks why supporting refugees is not a central goal of development co-operation when development issues have so much impact on refugees. Here, CIPS presents a short excerpt from a report entitled “A Call to Action: Transforming the Global Refugee System,” released by the World Refugee Council in January 2019.

Our world suffers not so much from a refugee crisis as from a political crisis — a deficit of leadership and vision and, most fundamentally, a shortfall of humanity and empathy. A UN system designed for another age and another need is left to cope as best it can with today’s mass displacement, applying conscience-salving, humanitarian remedies to political and economic problems with entirely predictable and inadequate results. Leaders shrink from intervening when conflict is preventable, and decline to hold perpetrators to account when they commit crimes against refugees and internally displaced persons (IDPs). At best, politicians who know better turn a half-blind eye to their own people’s fears that, while not groundless, are often exaggerated. At worst, these leaders themselves fan the embers of xenophobia for political gain. Funding to the United Nations Refugee Agency (UNHCR) is entirely voluntary and never enough. The result is that millions of people are left to suffer, while the rules-based international order on which global stability depends is steadily undermined.

The number of forcibly displaced people is at its highest since World War II — 68.5 million by the end of 2017, according to the latest figures from the UNHCR, almost three million more people than the year before. It was the fifth year in a row that a postwar record was set, and the numbers continue to rise.

The Syrian conflict has forced half that country’s population to leave home with no end to their displacement in sight. Hundreds of thousands of people in the Democratic Republic of the Congo have been displaced multiple times over decades. Rohingya refugees live precariously in makeshift camps along riverbanks in Bangladesh, their fate unknown. Afghan asylum seekers are forced to return to their country, only to join the swelling ranks of people who have been internally displaced. Every day, thousands of Venezuelans arrive in Colombia, many experiencing sexual and physical threats, and assault on their journeys and at the border by militia and cartel irregulars. Women and girls, in particular, desperately need protection. Australia intercepts and detains asylum seekers on remote Pacific Islands, restricting their mobility and access to basic needs, in violation of international human rights laws. In the United States, a president invokes an “America First” creed, impugns Muslims, disregards the rules-based international order, threatens the International Criminal Court, ends funding for Palestinians and shreds refugee resettlement programs. In Europe, where millions of refugees have sought safe harbour, “not welcome” signs are up even though many civil society groups have reached out to support arriving refugees and to protest xenophobic policies. Ships carrying migrants and refugees rescued in the Mediterranean are turned away from port after port, in a distressing echo of Jews trying to flee the Nazis’ tightening grip on Europe in the 1930s. Refugees are sent back to countries where their lives are in danger, in direct violation of article 33 of the 1951 Refugee Convention. And, in more than 100 countries, people displaced within the borders of their own countries remain in limbo, largely out of sight and out of mind and unable to return to their homes or settle elsewhere. Today, we are witnessing states individually and collectively abrogate their responsibility to help those displaced, by:

The present international refugee system, created in the aftermath of World War II, is simply inadequate for today’s world. Bold new measures are urgently needed. There are moral, political, strategic and economic reasons for transforming the present system:

Morally, it is a violation of fundamental principles of humanity — central to all world belief systems — when people forced from their homes are not treated with compassion and respect. It is a violation of basic human rights when the right to asylum is denied and when refugees and IDPs are denied sufficient assistance to allow them to live in dignity and security.

Politically, governments have a responsibility to protect their people, including through control of their borders. Governments will be accorded the social licence by their constituencies to resettle refugees only to the extent that the citizens are confident that their governments control the immigration process. Just as sheltering the dispossessed is integral to humanity, managing border entries is essential to stability. The two are not incompatible, as the highly successful rescue of the Vietnamese boat people demonstrated to an earlier generation.

Strategically, peace and security require the resolution of conflicts, which in turn can depend on durable solutions for those displaced. Brexit and the rise of the extreme right in Europe are linked to the mass movement of refugees out of Syria into Europe.

Economically, the effective integration of forcibly displaced people can contribute to economic development for newcomers and host communities alike, and alleviate potential costs associated with infrastructure, services and resources.

The ramifications of the present inadequate refugee system extend beyond the lives of the millions of individuals forced to flee their homes. The displacement of people is a clear indication that the rules-based international order is in jeopardy, as governments fail to protect their people and as the UN Security Council, largely paralyzed by the veto of its permanent members, is unable to prevent and resolve conflicts, and unable — or unwilling — to hold perpetrators of displacement accountable for their actions.

These challenges are daunting, but they are not insurmountable. The number of refugees and IDPs, although extremely high, represents just one-third of one percent of humanity, and support for them by a world of 7.6 billion people is not an unbearable burden.

To read more of the report, and its 55 calls to action for transforming the way refugee issues are handled globally, see the essentials here or the full report here.