Is the Iranian Empire Striking Back? Lessons from the Collapse of the Soviet Union 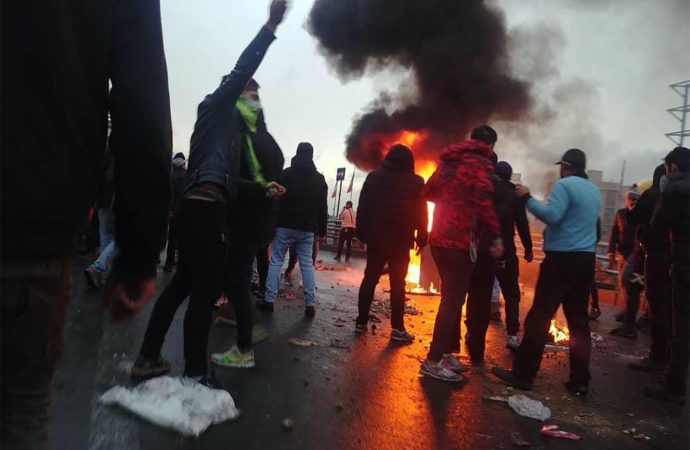 Exporting the communist revolution was a defining mission of the Soviet Union. But in practice, this translated into redirecting massive amounts of resources away from the domestic sphere, where they were desperately needed, towards consolidating the USSR’s influence over other peoples and territories. Ultimately, this agenda hollowed out the middle of Moscow’s power. It left ordinary Soviet citizens with basic needs unfulfilled and was one of the core reasons behind the regime’s collapse. By trying to export its version of Shiite Islamic revolution across the Middle East, without tending to the needs of its own population, has Iran caught itself in a similar bind?

Soon after the fall to Tsarist regime in 1917, Bolshevik revolutionary Leon Trotsky argued for the export of the revolution Russia’s traditional borders. However, in the context of harsh domestic resistance, he failed to convince his party and ultimately lost a power struggle with Stalin following Lenin’s demise. However, after WWII, Moscow created a Communist empire in Eastern Europe and beyond. Still, in an economic inversion of the historical colonial empires, the Soviets were forced to support the Eastern bloc states and Cuba and spend untold sums of money fomenting communist insurgencies around the world.

The cost of exporting the revolution, together with a highly inefficient economic system, took a considerable toll. In the seventh decade of Soviet existence, the country was plagued by food shortages, a collapsing health system, and an unprecedented environmental degradation. In an ultimate rebuke to Trotsky, Soviet-style communism became a by-word for corruption, dysfunctionality, and behavioural malaise known as anomie. First to rebel were Moscow’s satellites in Eastern Europe followed by unrest in the Baltic republics. Mikhail Gorbachev, the last Soviet leader, tried to reform the system only to trigger the collapse of the communist empire.

In announcing the Islamic Republic of Iran, Ayatollah Ruhollah Khomeini vowed to fulfil its “sacred mission” of spreading the Islamist revolution in the Middle East. Curiously, his vision was a combination of realpolitik-based regional hegemony and an eschatological reading of Shiism. The export project strived to undermine the centrality of Saudi Arabia in the world of Islam and expedite the return of the Mahdi by destroying the State of Israel, whose control over Jerusalem was thought to impede his comeback. According to Khomeini’s equally prophetically-minded successor, Ayatollah Ali Khamenei, Israel would cease to exist in the year 2036; a specially constructed Doomsday Clock counts down the days and the minutes towards Israel’s destruction.

Presiding over a country devastated by the civil upheaval and the bloody Iran-Iraq war, Khomeini had few options to export his revolution. There was also considerable opposition within the new regime to the so-called “Iranian Trotskyites,” a group of early export enthusiasts who congregated in the Revolutionary Guard Corps (IRGC) and later in the Quds Force (QF). Still, over time, the IRGC-QF developed the winning strategy of sponsoring Shite militias to act as revolutionary proxies. In 1982 the IRGC created the Hezbollah in Lebanon, followed in the early 2000s by several Iraq militias under the banner of Hashd al Shaabi, the Popular Mobilization Force, the Houthis in Yemen and finally, the Shite Liberation Army (also known as the Shite Legion) in Syria. The Iranian influence became so pervasive that Qassem Suleimani, the QF chief, became widely perceived as the virtual “viceroy” of the Iranian empire.

Although oil-rich, Iran’s economy was adversely impacted by the revolutionary export project, most notably in terms of standards of living, inadequate investment in infrastructure, and environmental degradation.

Iran’s proxy empire has required enormous investment to support proxies, including the shipment of expensive military equipment. No estimate exists as to how much the regime has spent on propping its empire, but analysts point out that Hezbollah alone receives some one billion dollars annually. Not coincidently, the regime’s nuclear weapons project was said to protect the proxy network by deterring the United States and regional actors from kinetic actions against Iran.

Although oil-rich, Iran’s economy was adversely impacted by the revolutionary export project, most notably in terms of standards of living, inadequate investment in infrastructure, and environmental degradation. Sanctions imposed on the regime to force it to relinquish its nuclear project brought the country to its knees. Hard economic indicators such as the unemployment rate, the devaluation of the Rial, and inflation painted a grim picture. A manifestation of dysfunctional and anomic behaviour, including high rates of STD, drug use, divorce, and crime had skyrocketed. In particular, the latter alarmed the Supreme Leader, who agreed on concessions that paved the way for the 2015 Joint Comprehensive Plan of Action (JCPOA).

In many ways, the current round of sanctions has exacerbated long-festering problems, putting the country in a highly precarious position. For once, Iran’s hold on Lebanon and Iraq has been challenged by daily and often violent protests. The situation at home is lamentable, with both hard and soft indicators showing deterioration. The inflation rate stands at 40.4 per cent, the overall unemployment rate climbed 18 per cent, and youth unemployment has reached 27 per cent. Levels of STD, HIV/AIDS, drug use, and violence have also risen upwards; the rate of HIV/AIDs infection alone shows a staggering annual growth of 80 per cent. Drug use doubled since 2011, divorce increased 57 per cent in 2017-2018, reaching 175.000, the highest rate in the history of the conservative society. Corruption, a long-time scourge of the economy, has skyrocketed, forcing the regime to proclaim an anti-corruption campaign.

Dissatisfaction with the deteriorating standard of living has triggered periodical riots where the crowds chanted slogans against wasting money on the various proxies. In 2018, the protesters intoned “Leave Syria [alone]. Think about us.” In the latest cycle, an increase in gas prices prompted by the sanctions spurred widespread protests across the country. Chanting “No Gaza, No Lebanon, I will die for Iran, “the demonstrators burned down banks, gas stations, and other property. In response, the IRGC and its brutal Basij wing killed 206 and wounded more than 3000, with thousands more arrested. If the past disturbances are any indication, the authorities would eventually suppress the unrest. Conversely, it is highly unlikely that the regime would try to implement a “Gorbachev style” course correction.

Still, the Islamic Republic faces several profound structural challenges that even the most ardent revolutionary exporters would be hard-pressed to overcome. The immediate issue is the perilous state of the banking industry, which is saddled with non-performing loans. To make matters worse, the Financial Action Task Force (FATF), an international body for combating money laundering and financing terrorism, had blacklisted the Iranian banks. President Hassan Rouhani failed to persuade Ayatollah Khamenei to implement the FATF demands because they would have cut off the IRGC’s access to banking services.

Reforming the convoluted subsidies system has proved itself equally painful because Iran is a neo-patrimonial state where public resources are used to buy the loyalty of their clients. Although the Majlis passed a bill to eliminate most subsidies in 2010, the program has grown, notably in the energy section. Cheap gasoline, which amounts to more than 15 per cent of the country’s GDP, has led to overconsumption, waste, pollution, and smuggling. As the recent riots demonstrate, cutting subsidies infuriated the lower classes, the previously staunch supporters of the regime.

Arguably, the most pressing issue is water shortages and ecological degradation. A combination of climate change, poor water management practices in agricultural, and lack of treatment of urban and industrial effluence, the crisis has been described as “existential.” The authoritative UN report stated that the acute water crisis would devastate agricultural production and cause a massive movement of ecological refugees. Some Iranian sources noted than within three decades, up to forty million people would have to move from draught-stricken areas. As thing stands, some of the 2018 riots were related to water scarcity.

Remedying the water and ecological disasters would require billions of dollars, which, under the best of circumstances, Iran would be hard-pressed to find. The current sanctions put even the modest hydrological projects of President Hassan Rouhani in jeopardy. Indeed, the government has been fighting a losing battle with Ayatollah Khomeini and the IRGC, who insist on “resistance economy,” a reference to promoting economic self-reliance as a tool for evading sanctions. For the ideological purists, making the economy resistant to penalties is part of the divine mandate to spread the Islamist revolution. Learning the lessons of the Soviet empire is not likely to be on their agenda.