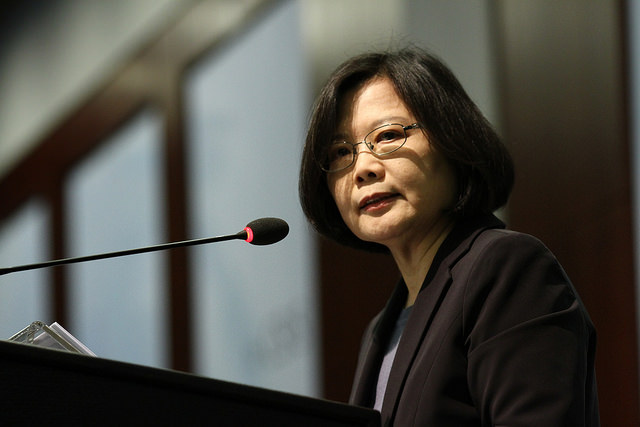 If Canadians take notice of one election this year, it should be the Taiwanese elections of January 16. After eight years of rule by the Chinese Nationalist Party (KMT) and unprecedented economic rapprochement with China, the Taiwanese elected Tsai Ing-wen from the Democratic Progressive Party (DPP) as president. Holding a law degree from Cornell and a Ph.D. from the London School of Economics, 59-year-old Tsai is the country’s first woman president. With 56% of the vote, her mandate is more strongly based on popular consent than the governments of either Justin Trudeau or Barack Obama. The legislative elections were even more decisive: the DPP took 68 out of 113 seats; the KMT was reduced to 35 seats. This is the first time that the DPP will control both the executive and legislative branches of government. Taiwan, a Japanese colony from 1895 to 1945, has been governed by the Republic of China since the end of World War II. The first direct legislative elections were held in 1992 and the first direct presidential elections in 1996.

Contrary to past presidential elections, the main issue this time was clearly cross-strait relations (a euphemism for China–Taiwan relations). Out-going President Ma Ying-jeou had signed 23 agreements with China, including the Economic Cooperation Framework Agreement. More than NAFTA (an issue that similarly divided Canadian voters), these changes were necessary. Although Taiwanese firms were already the largest investors in China, it was not even possible to fly directly from Taiwan to China until Ma initiated economic rapprochement. Ma’s vision for cross-strait relations was based on 1) a “three no” policy (no unification, no independence, no use of force); 2) mutual non-recognition of sovereignty and mutual non-denial of jurisdiction; and 3) the 1992 Consensus: “One China, different interpretations.” Ma reaped the fruit of his policies when he met with People’s Republic of China (PRC) leader Xi Jinping in Singapore on November 7, 2015.

Tsai’s election suggests that a majority of Taiwan’s voters are fed up with this approach. The shift in public opinion became visible in 2014 when students occupied the Legislative Yuan for nearly a month amidst a wave of protests. Their goals were to halt the Cross-Strait Service Trade Agreement, gain legislative supervision of cross-strait agreements, and avoid erosion of Taiwanese sovereignty. In this context, many Taiwanese voters saw this election as a choice between gradual integration into China or continuing existence as an independent nation-state. The momentum was so strong that the KMT even had trouble fielding a candidate for president. Nonetheless, a significant minority believed that the moderate KMT approach was the best way to protect peace and stability.

Tsai has long working experience in international negotiations and cross-strait relations. She was involved in negotiations for Taiwan’s accession to the General Agreement of Trade and Tariffs (GATT), the World Trade Organization, and the Asia-Pacific Economic Cooperation Forum. As chair of the Mainland Affairs Council (Taiwan’s body for cross-strait relations) from 2000 to 2004, she negotiated the so-called “mini-links” for transport and travel between the Taiwan-controlled islands of Fujian and the mainland. Many observers expect Tsai to be a patient negotiator and a pragmatist on international and cross-strait issues.

What are the implications of this election? First, this was not a referendum on Taiwanese independence. The state is still officially called the Republic of China. As long as Taiwan preserves this name, and as long as Taiwanese voters select an ROC government, Taiwan is still part of a historical and cultural China. The experience of Canada and the United States shows that a common language and culture, economic integration, and geography do not necessarily lead to political unification. Yet, as long as the ROC exists, the Taiwanese have not foreclosed the possibility of eventual unification.

Second, the fact that the Taiwanese can elect a government recognized worldwide (e.g., when ROC passports are accepted for visa-free entry into Canada and many other countries) is partial proof that the ROC is an independent, sovereign state. For decades, the states on both sides claimed to represent all of China. No country can legitimately recognize two competing states as the government of China, and this principle explains why the ROC lost its status as representative of China in the United Nations in 1971. The question, however, is no longer which government represents China. Obviously, Taiwan’s democratically elected government represents its population of 23 million people. The question now is how to best cultivate substantive relations with Taiwan in the absence of official diplomatic relations.

China consistently tries to coerce states into accepting their One China policy — pretending that Taiwan is a contested province of the People’s Republic. When Canada and China established diplomatic relations in 1970, however, the Joint Communiqué stated, “The Chinese Government reaffirms that Taiwan is an inalienable part of the territory of the People’s Republic of China. The Canadian Government takes note of this position…” In diplomatic parlance, “take note” recognizes that a claim was made but politely refrains from denying or endorsing it in order to focus on other priorities. Former Prime Minister Pierre Trudeau was responsible for establishing diplomatic relations with China, in a way that would permit evolution of relations with Taiwan under changing circumstances. His son Prime Minister Justin Trudeau now has the job of nourishing substantive relations with that thriving yet marginalized democracy.

On January 17, the Canadian government issued the following statement: “Taiwanese and Canadians share similar values with regard to democracy, freedom and human rights. We have supported the ongoing development of Taiwan’s democratic institutions over the years and welcome the election of Taiwan’s first female president, Tsai Ing-wen. Canada looks forward to deepening its long-standing trade and people-to-people ties with Taiwan.”

This is a tactful way of saying that we hope to preserve the status quo of Taiwanese democracy. Although challenges lie ahead, we can continue to maintain meaningful relations with Taiwan according to our shared values and interests. In fact, if we wish to foster peace and stability in the region, relations with Taiwan should be a priority.

“The Colombian 🇨🇴women's movement has travelled a long and arduous path to recognize the impact of the armed conflict on their lives and ensure transitional justice“ Argues Paola Jiménez in a great new blog for 🌐CIPS https://www.cips-cepi.ca/2021/07/24/we-managed-to-participate-but-we-had-to-fight-for-it-collective-reparation-and-women-in-colombia/ https://youtu.be/bYZP7GLEVlc

What‘s behind the recent popular demonstrations in Colombia 🇨🇴? How do they relate to the peace process between Bogotá and the FARC? Check out CIPS’ new mini-series on Colombia by Stephen Baranyi & @JustGovGroup’s Kimberly Inksater https://youtu.be/bYZP7GLEVlc https://www.cips-cepi.ca/2021/07/21/peace-with-justice-in-colombia/